When you live in Los Angeles, chances are you know someone in the movie or televison industry. So when I got an email from my Casting Director/Producer friend, Frances Mena, last Friday night asking if Sophie and I wanted to be extras on the set of “Courage, New Hampshire, a historical drama set in 1770, that she’s been working on. I jumped at the chance. Isn’t it every girl’s dream to dress up in period clothing? Not only that, Frances knows that period of history is right up my “cobblestone alley”! Now that I’m a “Rebel with a cause”, I threw my camera and ipad in the back of the car, because you just never know where a blogging opportunity might be! For more on “Courage, New Hampshire”, and how to support the production, follow this link https://www.colonybay.net/ and join the “Colony”! 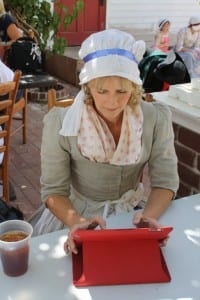 Ipad and Camera…ready to blog!

Sophie and I blew off our Saturday chores and drove 85 miles east to Oak Glen, California, where Riley’s Farm is located. Nestled high up in the San Bernardino mountains, Riley’s Farm is a Colonial and Civil War living history farm that hosts historical, educational programs for students, fruit and berry picking and has a bakery and the “Hawk’s Head Public House” which serves traditional 18th century food. https://www.rileysfarm.com 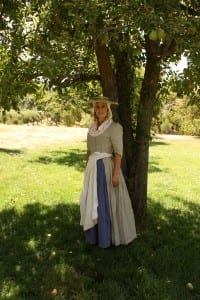 We arrived around 10 am and had a nibble at the breakfast buffet before we reported to Mary in wardrobe. To achieve the proper 18th century silhouette, we would have to remove our 21st century undergarments. First we were given a night shirt which comes to about the knees. Then the adult women were given “stays’ which was the precursor to a corset. The stays went over the night shirt and were laced up in back. Next came stockings, a petticoat and over skirt and finally the dress, which is really a half dress with the over skirt peeking through. Finished off with an apron and neck scarf, we were sent to hair and make-up. 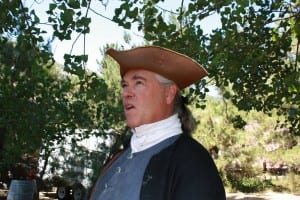 Once in our clothes, we reported to the set. Our scene was set inside the tavern, where the citizens of Courage have been holding their “meetings” or church services. The first thing I noticed were the cameras. No more big film cameras! Instead they were replaced with two Canon 7D cameras and one Canon 5D…the big daddy version to my little Canon Rebel. The dollies were smaller and sleeker too. All the cameras were hooked up to a giant computer screen so they could evaluate each scene immediately, therefore cutting down on the number of takes each scene needed. The expense of digital versus film is also an amazing bi-product of this technological age!
While we were waiting, I snapped away at the farm, the actors, the set, the food, even the camera equipment.
When we broke for lunch and I had the thickest, juiciest hand formed burger I’ve had in a long time. I broke my “hardly ever eat beef” rule for that baby!

With the shooting set to end around 2 pm. I figured I’d have plenty of time to make the hour and thirty minute drive back to Pasadena and finish off a fruit tart for a dinner party that we were going to that night at 6:30. But still filming at 3:45, I realized I was cutting it close. Then Frances told me about Riley’s famous double crust apple pie. When I heard a description of it, I knew I had my blogging opportunity! Each Riley’s Farm apple pie contains FIVE pounds of apples from Riley’s Farm. FIVE pounds? Are you kidding me? The last of the pies had just been sold, but Mary Riley said she would have someone bake a couple right then and there for me to photograph. It was worth waiting an extra hour for, the pie was at least 7″ high and was a visual masterpiece, not to mention the smell!
But, by the time it was ready, I knew I’d be slipping into Pasadena just about the time of my party, with no chance to wash off my 18th century make-up and hair, let alone finish off my fruit tart. Frances graciously let me take her pie as my dessert contribution….10 minutes after the pies were out of the oven, I finished snapping and Sophie and I were off. I made it to the dinner party a little late, but with a fabulous pie and story to match!

Home » Sweets » On A Movie Set In Courage, New Hampshire