Looking for a way to spend a few days with your significant other? I whole-heartedly recommend Romantic Mendocino! 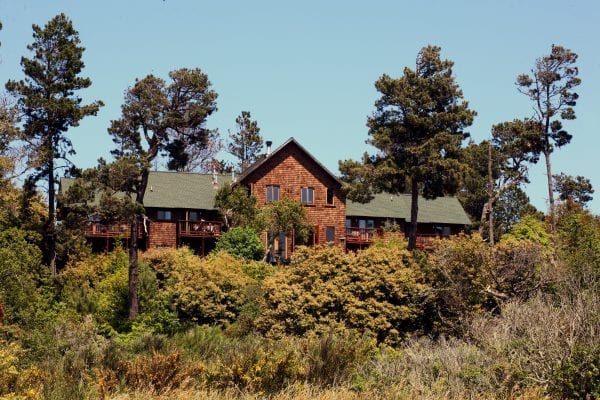 I’m somewhat embarrassed to admit that I’ve lived in California for most of my life, but I only recently visited Mendocino! When I was offered the opportunity to visit Mendocino, and stay at the Brewery Gulch Inn, I was excited. We were not disappointed! Located about 3 hours north of San Francisco, Mendocino is both breathtakingly beautiful and serene, yet offers plenty of outdoors activities for the more adventurous.  Disclosure: I was hosted by the Brewery Gulch Inn, however there was no expectation of a review. As always, all opinions are my own. 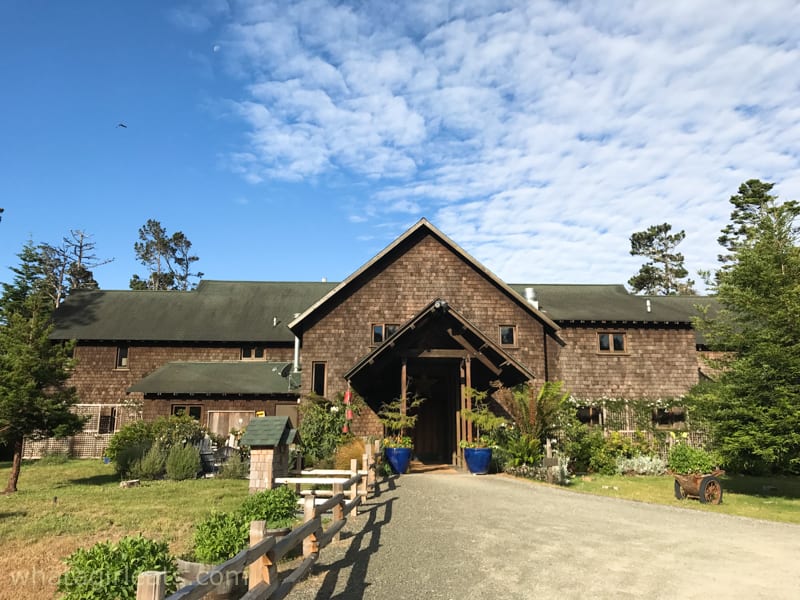 Front of the Brewery Gulch Inn. Deer and wild turkeys can be found grazing on the meadow in front of the inn. (Photo What A Girl Eats)

I had never been north of Sacramento or Napa, even though I had lived in San Francisco in my 20’s. Surrounded by California state parks to the north, east and south, Mendocino sits atop a headland overlooking the ocean. Originally founded as a logging community, in the mid-1800’s, the area still boasts a thriving logging business. Going both in and out of the area, we passed many logging trucks loaded with redwood, and even a mill which had logs and finished lumber. 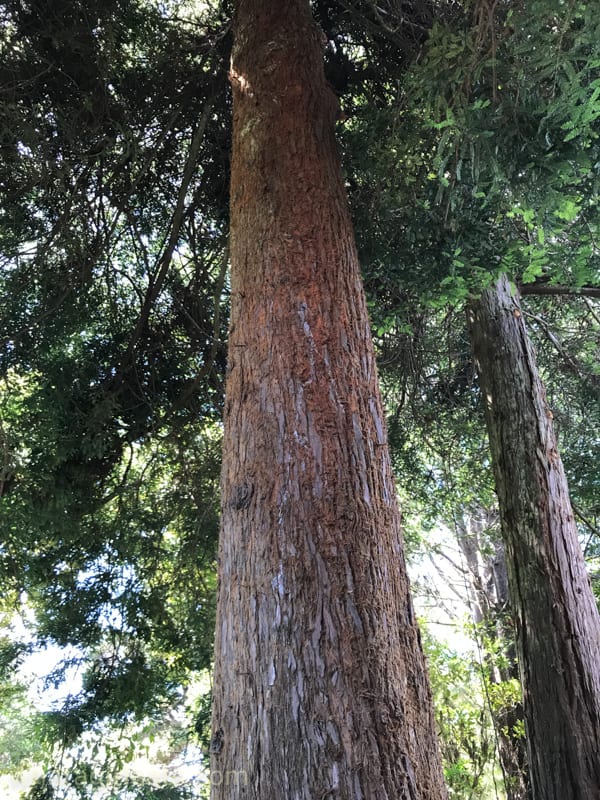 Redwoods trees surround Mendocino county. Logging was a large part of the area’s economy in the 19th century. (Photo What A Girl Eats)

When I researched the Brewery Gulch Inn, where we’d be staying for two of the three nights, I found out that it was rated the #1 hotel in Northern California by the 2016, Conde Naste, Reader’s Choice Awards. We would soon find out why. I was also intrigued to discovered that the original builder of the inn capitalized on the logging aspect of Mendocino’s history. 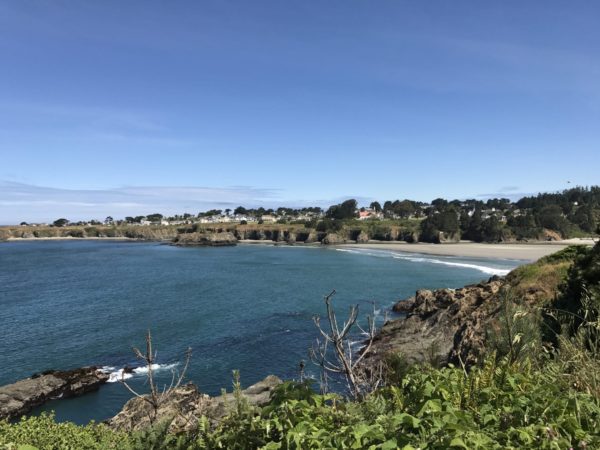 View across the cove to Mendocino atop the bluff.
(Photo What A Girl Eats)

Although you’d never know by looking at it, the Brewery Gulch Inn was built in 2001. It has the rustic and quiet feeling of a structure that could have been built 100 years ago. The timber that was used to build the Craftsman style building, was eco-salvaged from Mendocino’s Big River.  The lumber used were called “sinker” logs that had been buried beneath the silt in the mid-1800’s, when they were stacked as decks behind the dams. There they lay for over 100 years, and were perfectly preserved, until they were unearthed and used to build the Brewery Gulch Inn. 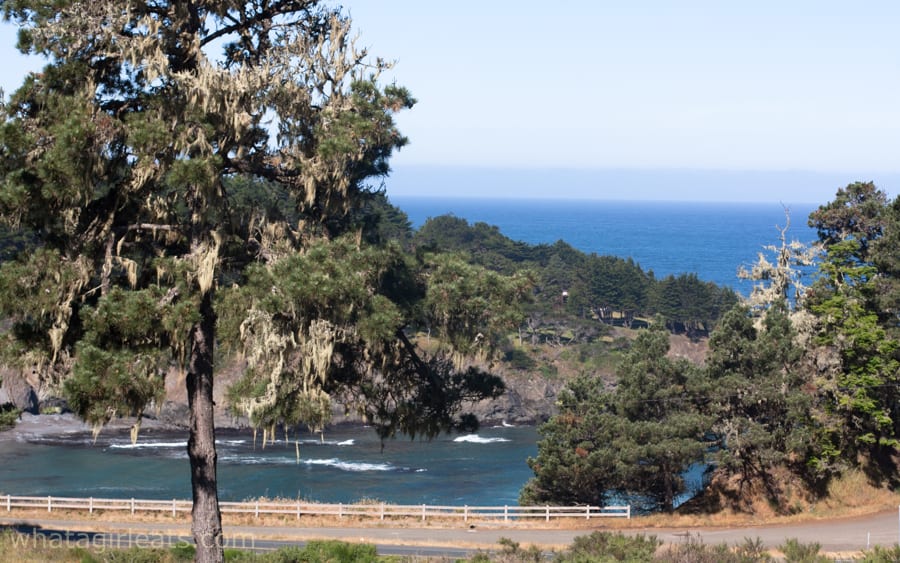 Smuggler’s Cove from the Inn. (Photo What A Girl Eats)

The redwood logs were used for most of the construction of the inn. Not surprisingly, the eco-friendly theme is reinforced throughout the inn. Situated above Smuggler’s Cove, one enters the inn through massive doors and into the Great Room, with soaring 14 foot ceilings and redwood deck. 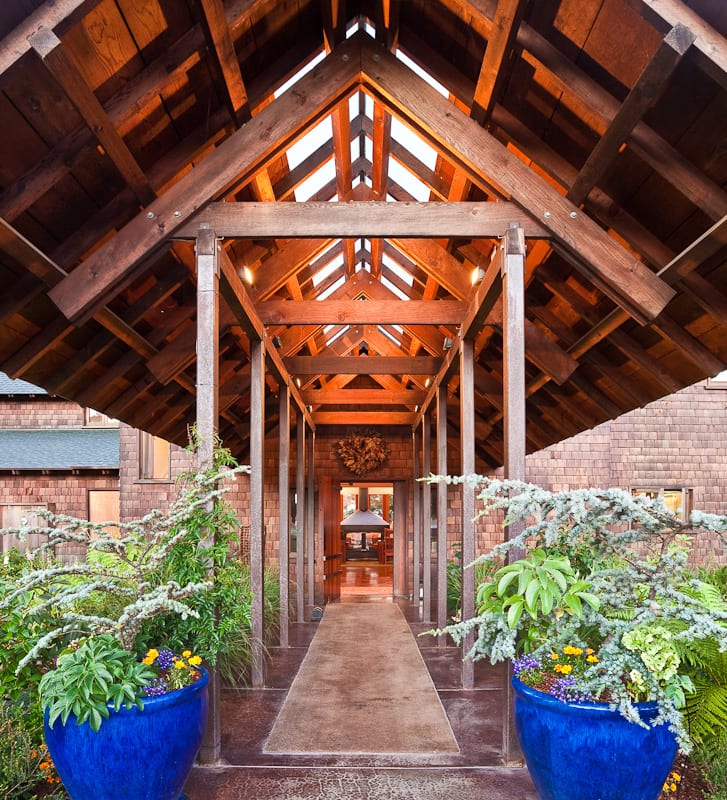 Immediately there is a sense of peace and tranquility. The colors and tones, the decor, and even Elijah at the front desk, were soothing. (By the way, I titled this “Romantic Mendocino” for a reason, if you’re interested in a wild time, or a family hotel, this is not the inn for you!) If however, you want to spend quality time with your significant other, in an utterly relaxing environment, read on! 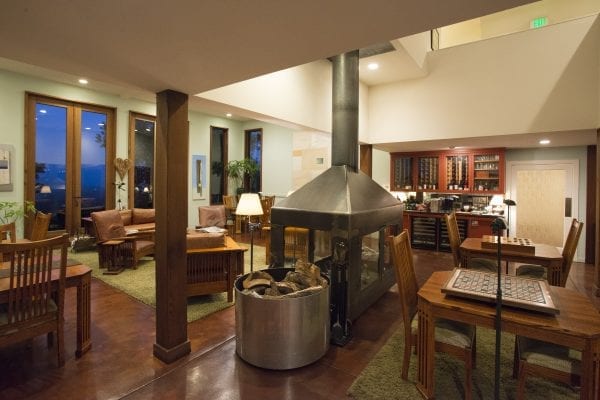 The Great Room and fireplace. (Photo courtesy of the Brewery Gulch Inn)

Elijah showed us around the great room, where to to find coffee, tea, and a continuous supply of fruit-infused water, with hand-blown glasses made by local artisans…naturally! Most of the inn operates on the honor system. 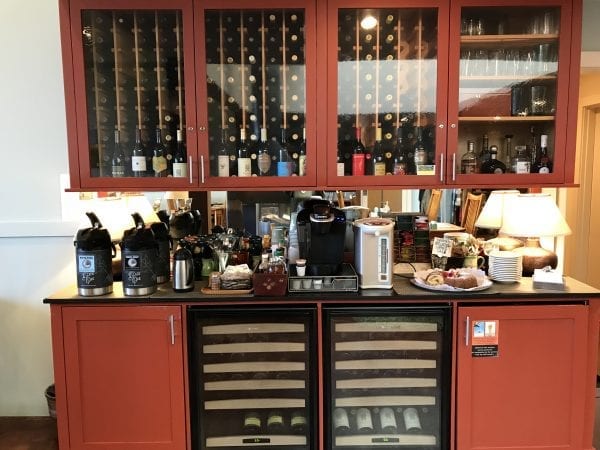 Beverage station at the inn offers coffee, tea and a sweet nibble or two all day long. (Photo What A Girl Eats).

Within the lobby, there is a small gift shop, games, a massive DVD collection, and an extensive library. Soft 70’s rock plays quietly in the background. There is also a large fireplace and plenty of wood which is the centerpiece of the Great Room. Since we had planned a mid-June trip, I was checking the weather every day for a week on my phone. While it was in the 90s in Los Angeles, it was an absolute perfect, 65 degrees and sunny during the day in Mendocino. It even cooled down enough at night for them to light a fire during cocktail hour. 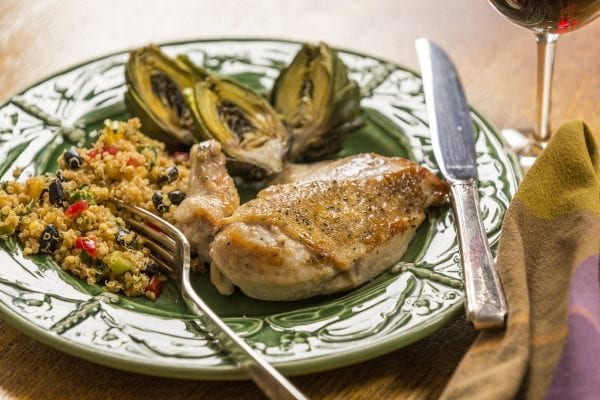 The Brewery Gulch says it offers a “complimentary” “light” supper, but it actually was more than enough for us. Starting at 5:30, the host pours complimentary local wines and beers, with a different selection each night. I really like that they honor local craftsmen of all kinds, from the locally crafted beers and wines and hand-blown beverage glasses, to the clothing and crafts available for purchase in the gift shop. 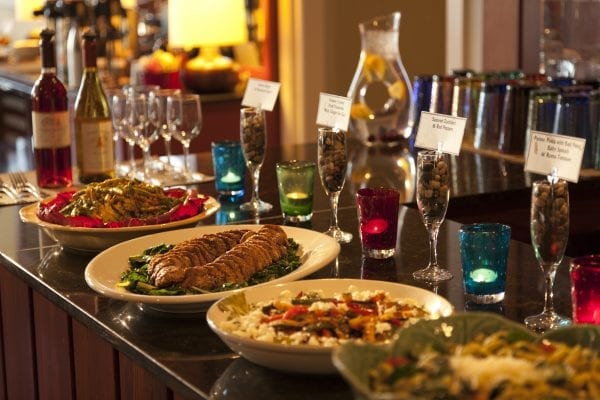 The “light” supper buffet offered during the wine hour is included in the price of your room. Photo courtesy of Brewery Gulch Inn.

The dinners? Absolutely delicious! The chef honors every guest’s dietary needs, by asking ahead of time if there are any allergies or food sensitivities. (They even have gluten free bread) The first night we ate maple glazed salmon on a bed of spinach, with a salad, and roasted potatoes. The second night was pork with a rich mushroom sauce. The buffet is laid out on a table, and everyone is able to help themselves. There was more than enough both nights, that we were able to have seconds if we desired.

What sets the Brewery Gulch Inn apart from many bed and breakfasts or inns is the absolute attention to details. Each room is decorated slightly different from the next, but all with the over-reaching theme of quiet elegance. Every room has ocean views (many with balconies over-looking Smuggler’s Cove), Sferra linens, a gas fireplace, leather club chairs, wifi and flat-screen televisions.

The bathroom has plush bathrobes and Asprey and Molton Brown bath products. Another small point, but one that was important to me, are the full-sized bath products. They aren’t meant to be taken, but are re-filled after each guest leaves, again reinforcing the “eco-conscious” vibe in the hotel. There were also apothecary jars filled with cotton balls and Q-tips, so Spencer and I both felt as though we were in our own bathroom. It is the attention to the smallest details that have clearly made it such a highly rated inn. (Tripadvisor’s ratings give it 97% 5 stars) Spencer also remarked that it was the cleanest hotel room and bathroom room we’d ever stayed in! Even the carpet felt clean enough to walk on in bare feet. Clearly the Brewery Gulch expects that guests will be spending a lot of time in there rooms, and indeed the club chairs, fireplace and comfy beds helped fuel the romantic mood! If you still don’t want to leave your room in the morning, you’re able to order the complimentary breakfast to be delivered to your room. 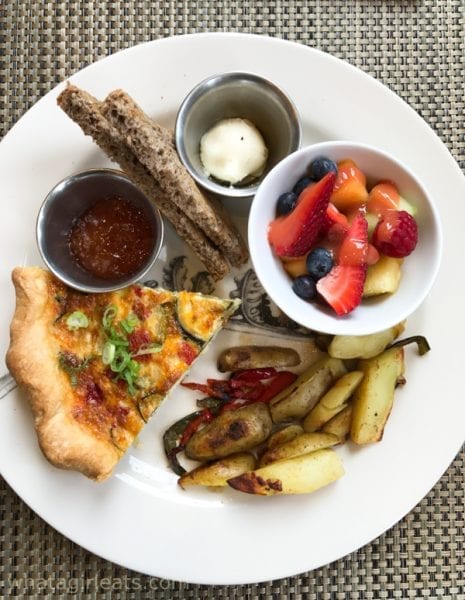 Spencer had the quiche one morning.  Photo What A Girl Eats.

The breakfast is another aspect that sets this inn apart from so many B&Bs. Most B&Bs serve a simple buffet, but at the BGI, you order your breakfast from a menu, and it’s cooked to order. There is the omelet of the day and the Eggs Benedict of the day, in addition to the regular menu. You can enjoy it in the Great Room, or on the adjacent veranda overlooking the ocean. Perfectly presented, with a little flower garnish on every plate, the breakfast was delicious, and enough to hold us over until the 5:30 happy hour. 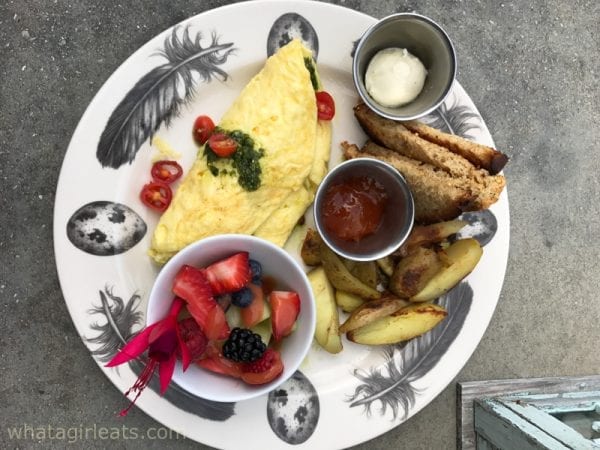 One morning I chose the omelet of the with gluten free toast. (Photo What A Girl Eats)

Following breakfast, you can take a short walk on the trails around the inn where you might see deer having their own breakfast on the front lawn, or take a longer walk across the highway and down to the ocean or estuary. 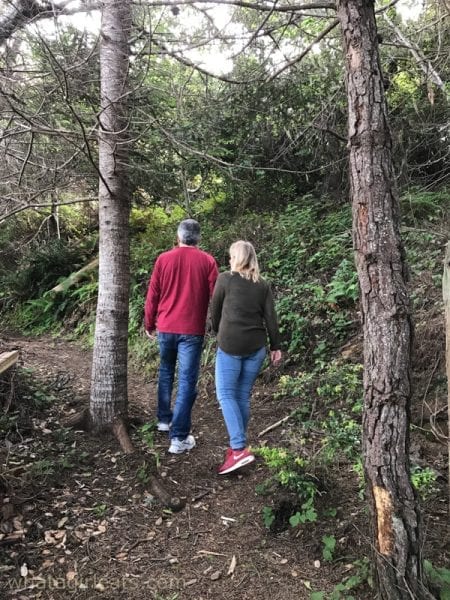 One of the short trails on the Brewery Gulch property. (Photo What A Girl Eats)

If you chose to, you could spend the better part of the day relaxing, reading or playing cards in the Great Room or sit on the veranda. 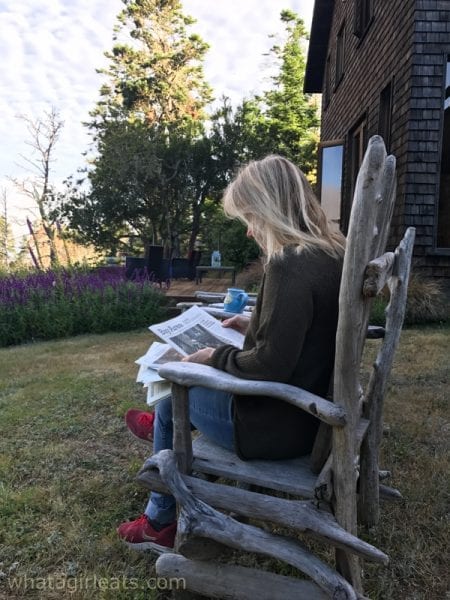 Morning tea and paper in the garden.

The quaint town of Mendocino is just minutes north where you’ll find shops, galleries and simply fantastic views of the rugged coastline. 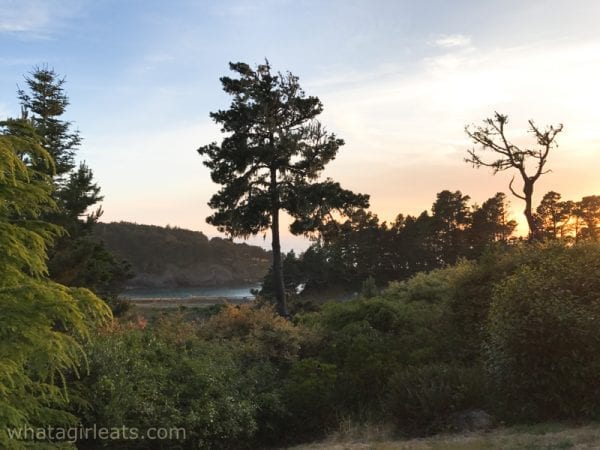 Sunset from the garden. Photo What A Girl Eats.

In a future post, I’ll be sharing a few things to do in Mendocino, (besides holing up in a cute inn!) So if you’re looking to spend a few quiet days in Romantic Mendocino, put the Brewery Gulch Inn on the top of your list!

Romantic Mendocino! Stay at the top-rated inn in Northern California!

Romantic Mendocino! Stay at the top-rated inn in Northern California! 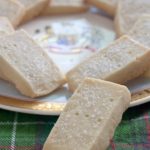