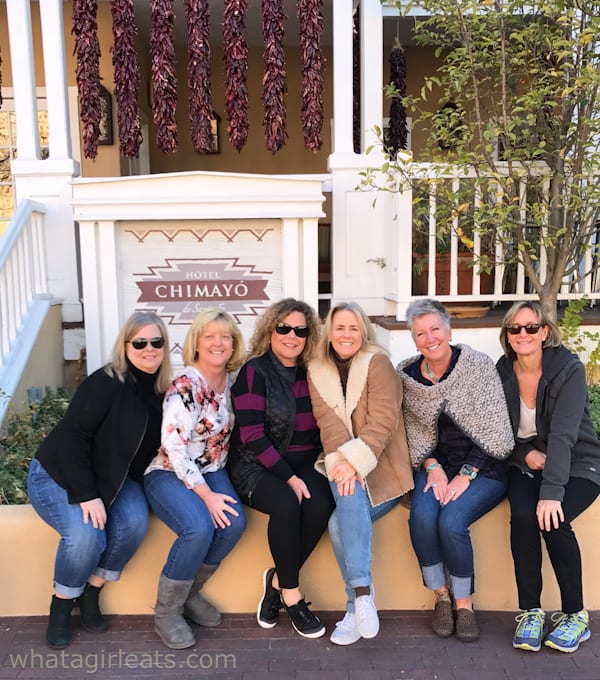 Girl’s Weekend at the Hotel Chimayo in Santa Fe. The perfect setting and location, just 1/2 block from the plaza.

In the 29 plus years I’ve been married, I’ve never taken a girl’s weekend. So when my long-time high school friend, Rita, gave me a nudge, and suggested a Girl’s Weekend in Santa Fe, New Mexico, I finally decided to take the plunge! Santa Fe has been on my US bucket list for a long time. I was really excited to see the art and architecture, sample the amazing food, and catch up with old friends. (Disclosure: I was hosted by the Hotel Chimayo for two nights, received a massage from Ten Thousand Waves Spa, and was given museum passes for some of Santa Fe’s museums, by the Santa Fe Board of Tourism. I was under no obligation to write a favorable review. As always, the opinions expressed are my own.) 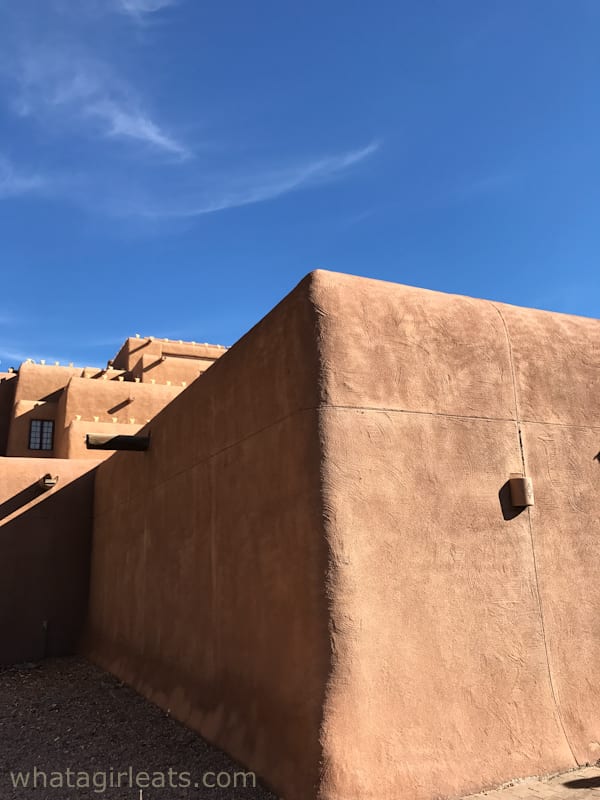 Beautiful adobe buildings are one of the many types of architecture you’ll see in Santa Fe.

While we all were searching for hotels to stay, I really wanted to stay somewhere that would have all the Santa Fe charm I had imagined. Since there would be six of us, we wanted double rooms so that everyone could have their own bed. We decided that my room with Rita, would be the “hub”, where we’d meet for drinks, snacks or cards. So we were also looking for a hotel that had a fireplace and a sitting area. Lastly, we wanted a hotel that would be reasonably priced for everyone. If it was close to the square, even better! Phew! A tall order, but when we found the Hotel Chimayo, and it ticked off every box, we knew we had a winner! Bonus; it was just yards from the plaza! 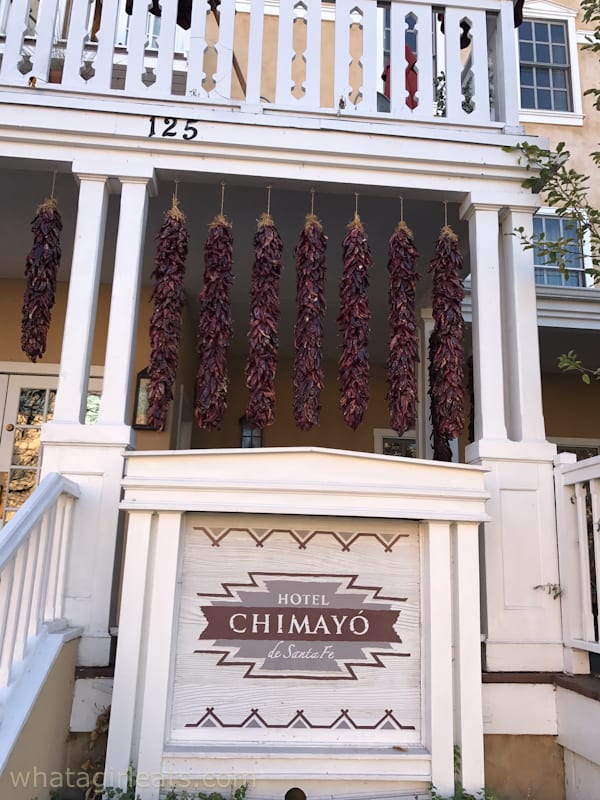 Santa Fe was such a great choice for all of us to meet. While only one of us was flying in from the East Coast, the rest of us flew, or drove in from California, Texas, Colorado and Albuquerque. Albuquerque is under a 2 hour flight from LAX, (non-stop). Santa Fe is just around an hour by car from the Albuquerque airport.

Some of us flew into Albuquerque on Thursday evening, and met up with a friend of mine from cooking school for drinks at the pub he owns, Two Fools Tavern. It’s just a 10 minute drive from the airport and has an amazing list of whiskeys and beers, not to mention fantastic food! Definitely worth a stop for a meal or drink if you’re spending a night in Albuquerque! Try the extra crispy fish and chips, or the house cured whiskey gravlax! 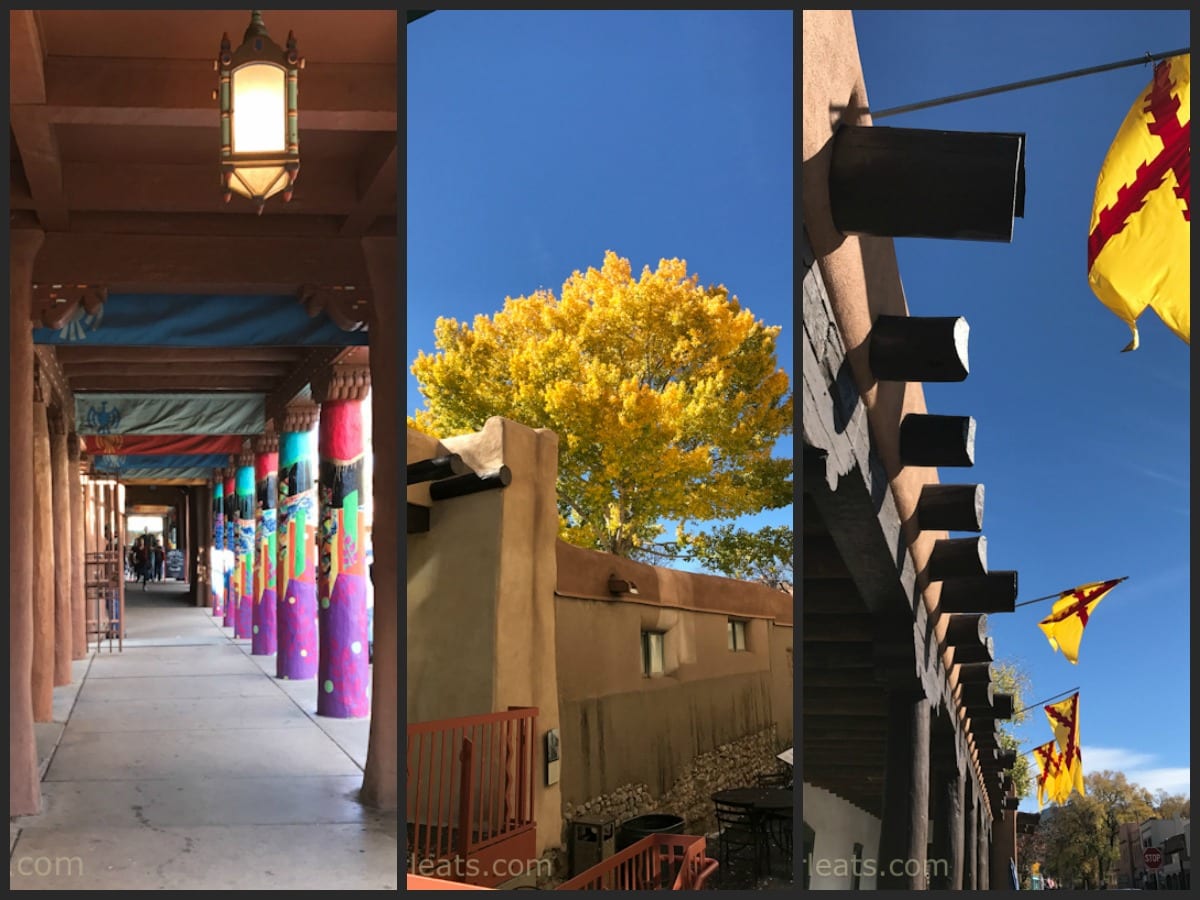 On Friday morning we headed north to Santa Fe with with a stop Bernalillo and the Range Cafe for brunch. It’s a quirky place with a funky decor and delicious food. I had the Carne Adovada Huevos Rancheros, per our server’s suggestion, and was not disappointed!

We arrived a few hours early, but were still able to check into the Hotel Chimayo before 3 pm. Tip: It’s always worth calling to see if you can check in early!

The lobby is small, but charming, with a beautiful tile fireplace, Native American art, and a soaring balcony, where the restaurant is located. There is coffee and infused water available at all times. 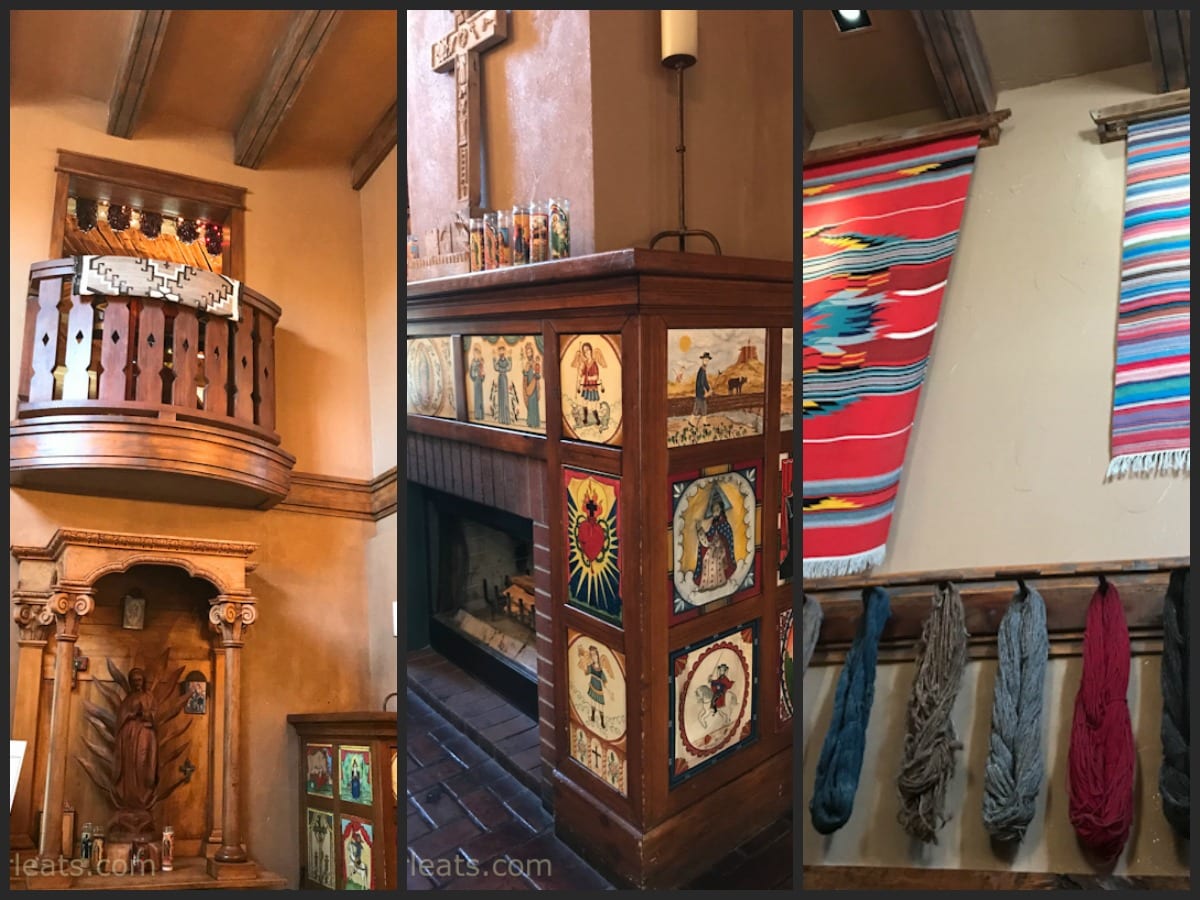 Lobby of the Hotel Chimayo with wood burning fireplace and soaring ceilings.

Our room had a sitting room, real wood burning fireplace, mini-bar, and seating for all 6 of us. 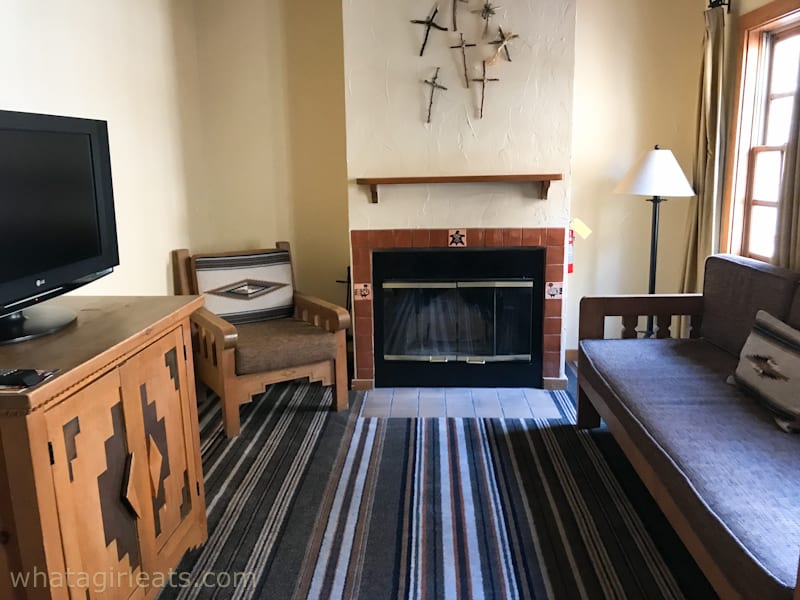 The main bedroom had two king-sized beds facing floor-to-ceiling- windows which lead to a balcony. The decor is naturally very Santa Fe! 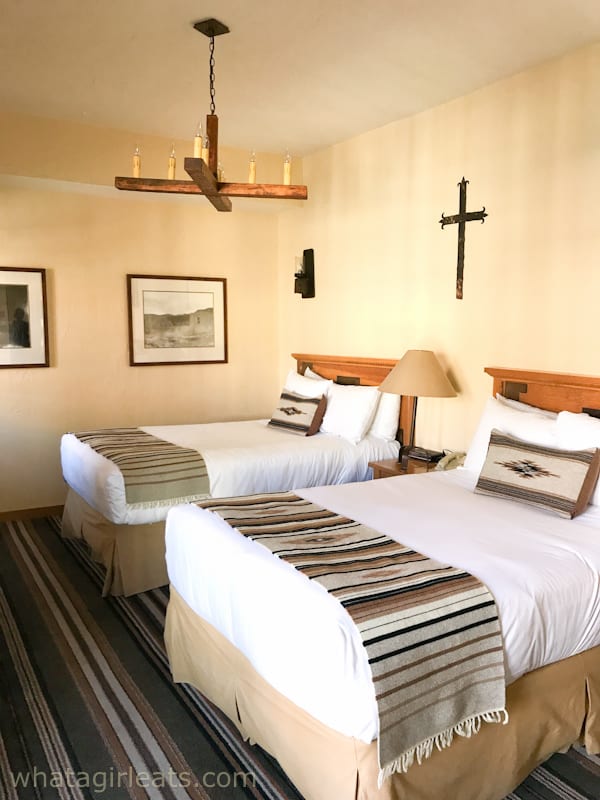 The wood-burning fireplace was really nice. While you need to call down and ask someone to light the fire for you, it’s well worth it. The gentleman who came to our room, took real pride in lighting the fire. He told us the type of wood he had brought, where it was gathered from, and what properties each type of wood had. He added just enough wood, so that the fire wouldn’t be burning when we left for dinner, and then returned after dinner to re-light it! The smell of wood burning fireplaces all over Santa Fe is lovely in the fall! 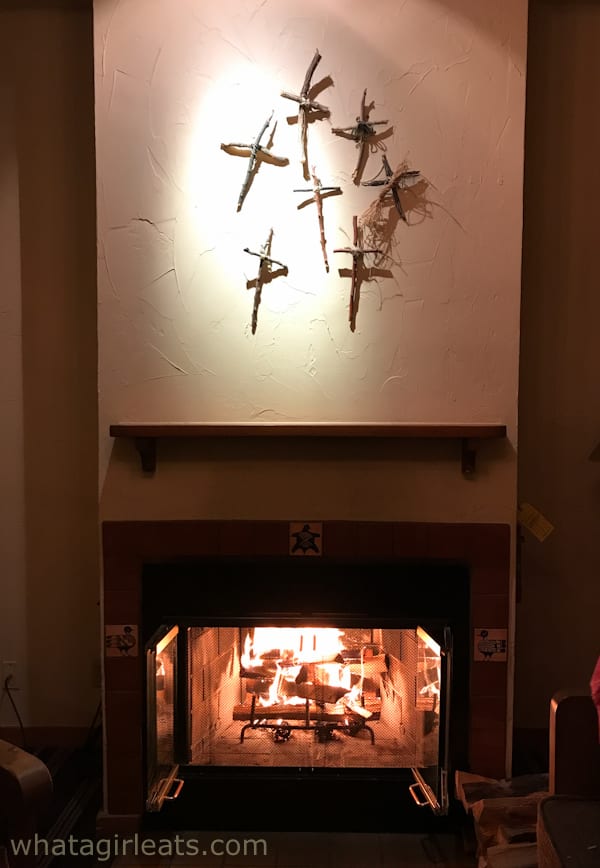 The wood burning fireplace was a bonus.

What would a girl’s weekend be without a trip to a spa? My girlfriend, Rita, had been to  Ten Thousand Waves  many years ago, and insisted that we had to go there! I had spent a lot of time on their website, mulling over all the possibilities for being pampered! Tip: You will want to spend several hours here. Even if you only book a massage, you can spend a couple of hours in one of the hot tubs, sauna, or foot tub. Ten Thousand Waves is just about 15 minutes from Santa Fe, but it feels a lot further! From the moment you enter the spa, you’ll feel relaxed. Ten Thousand Waves has the feeling of a very Traditional Japanese bath house, with both communal and private baths available. 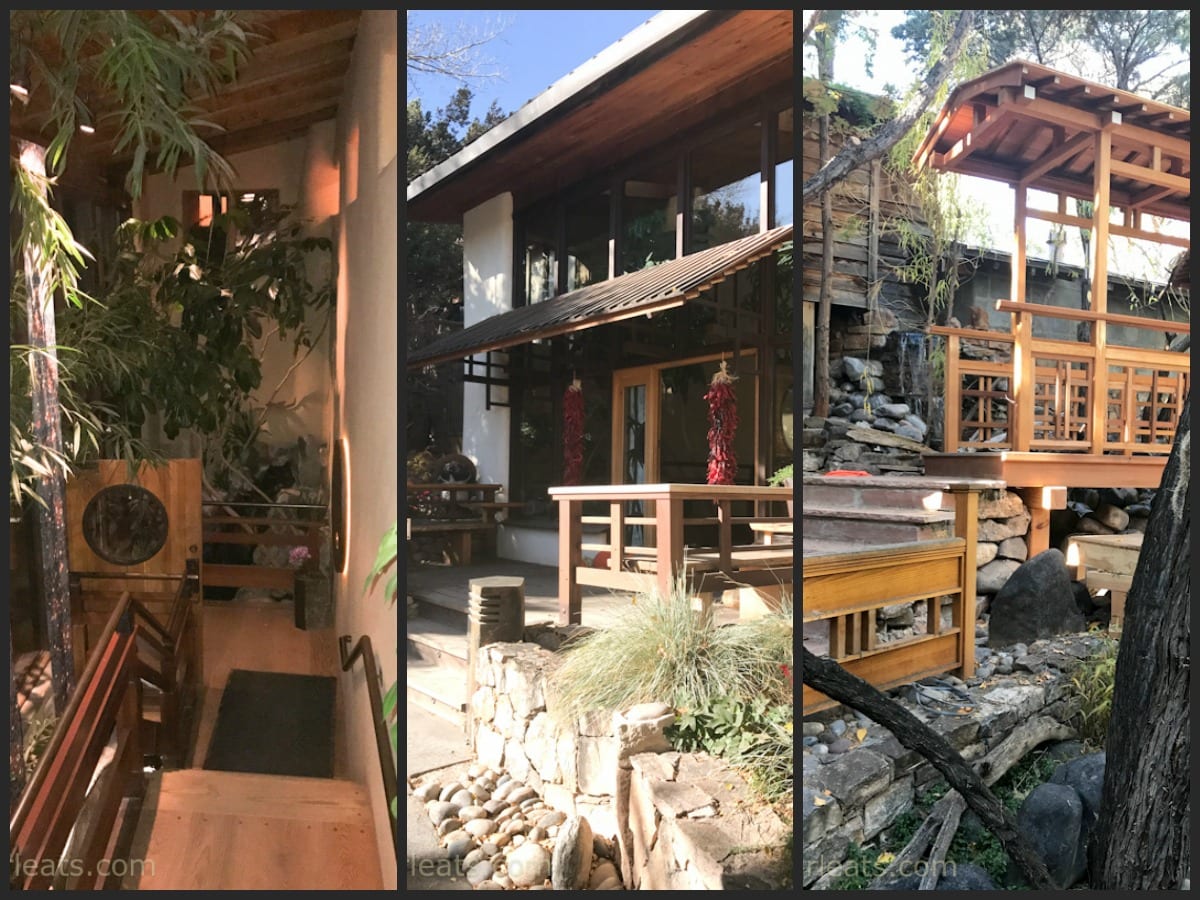 Ten Thousand Waves is based on a traditional Japanese bath house and spa.

We spent time between our massages in the women’s bath, which although it’s outside among the trees, still felt very secluded and private. It’s a good thing too, because even though it’s “bathing suit optional”, everyone was in the buff. Both of us had the traditional therapeutic massage, and head and neck massages, which were fantastic! Plan on spending an extra hour either between appointments, or before or after your treatments. The changing room with lockers, towels, showers and toiletries was perfect, since we wanted to shower before heading back to the hotel. Be advised, this is a very popular spa, so book your appointments as far ahead as possible! 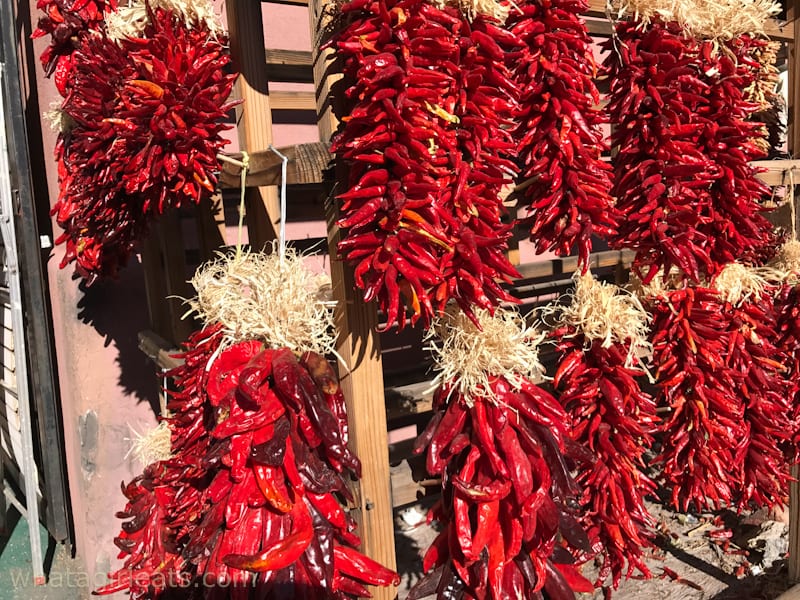 Chile ristras are everywhere you look in Santa Fe!

Chile ristras hang from just about every portico, doorway, arch, and window in Santa Fe. I had planned on buying one before I left and never got around to it. You can purchase one, which is completely edible, here. (affiliate link) I think they would make a lovely Christmas decoration. (You can buy wreaths too!) 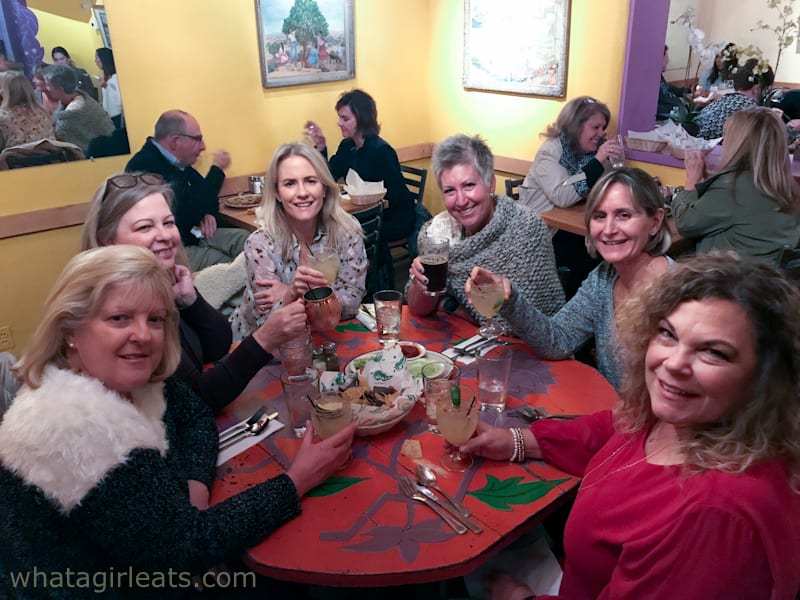 Where to eat in Santa Fe:

I had gotten a long list of recommended restaurants from my Albuquerque friend, but when I tried making reservations, many of the restaurants were either booked, unless we came in at 5:00, or simply did not take reservations. The Shed was highly recommended by several people, so we all had our hearts set on eating there Friday night.

Tip: even though we did not have reservations, the hostess suggested we come in at 6pm and put our names in for 8pm. That worked out perfectly, and we when we came back at 8, we did not wait for more than 5 minutes!

The food was excellent as promised! While in Santa Fe, you must sample the green chile! Each restaurant will have a different take on what’s hot, or not so hot, so be sure to ask your server for recommendations. The “Christmas Chile” is both red and green chile on one plate, and usually served at most restaurants. If you’re a margarita lover, you’ll find a huge selection of margaritas! (You can even purchase a “Margarita Trail Passport” and get stamps when you try the signature margarita at over 30 bars and restaurants!) 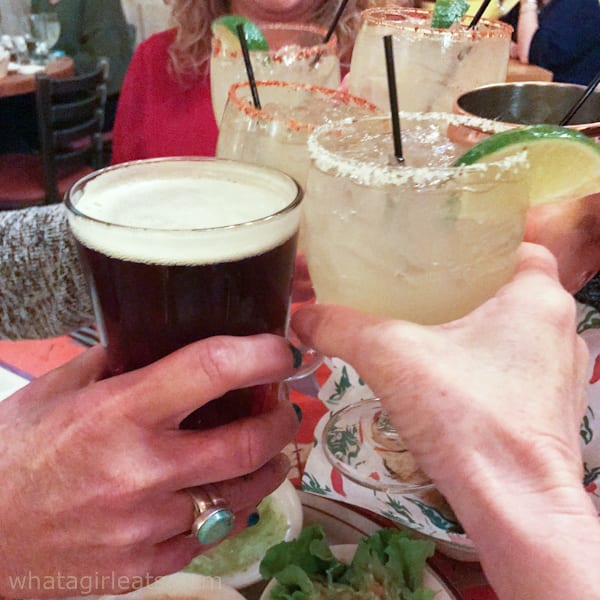 Toasting 40 years of friendship at The Shed.

On Saturday evening we at at La Plazuela, in the La Fonda Hotel, just off the Plaza. The setting was lovely and the food was outstanding. 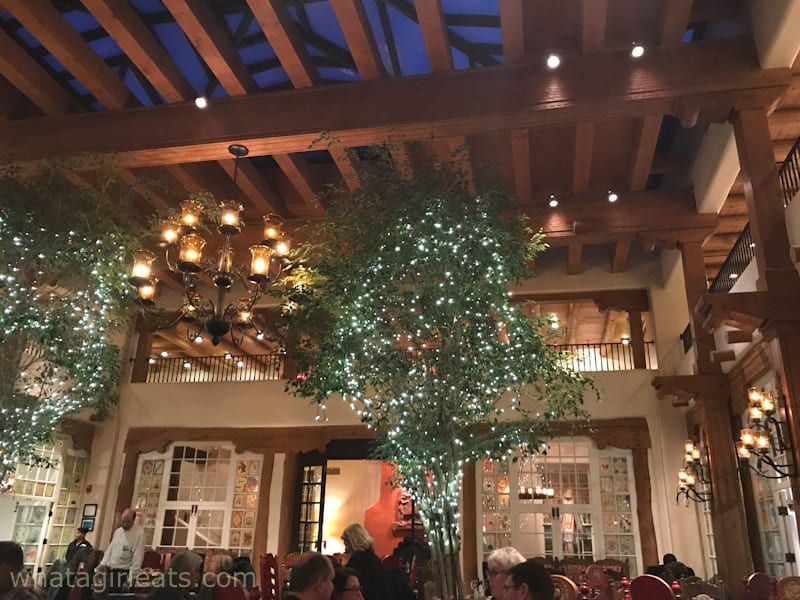 Interior of La Plazuela restaurant in the La Fonda Hotel.

What to See in Santa Fe:

Saturday Morning I went off on my own and headed to museums. While the five of them went for a leisurely brunch just off the square at Pasquale’s (also highly recommended, and delicious, according to my girl friends), I headed to the Georgia O’Keeffe Museum where you’ll find an impressive collection of her work, as well as photographs of her. 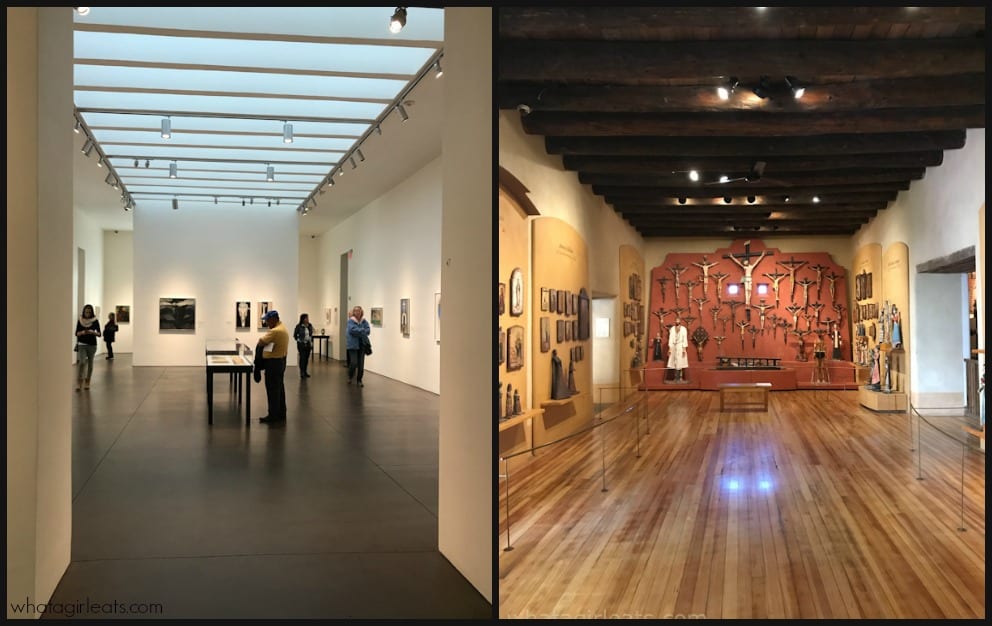 Georgia O’keeffe museum and Palace of the Governors museum.

Then I headed to the New Mexico Museum of History, which lead to the Palace of the Governor’s, and then back on to the plaza where one can shop for Native American goods, and meet the craftsmen. Santa Fe is very walkable, and all the museums are within a few blocks from each other. The vendors are regulated but the state, so you can be sure that what you purchase will be authentic and sold to you by the craftsmen themselves! If you plan to be in New Mexico for several days, it’s well worth it to purchase a New Mexico Culture Pass. For only $30, the Culture Pass will give you admission to 8 museums and 7 historic sites. It’s good for one-year from the time of the first use. 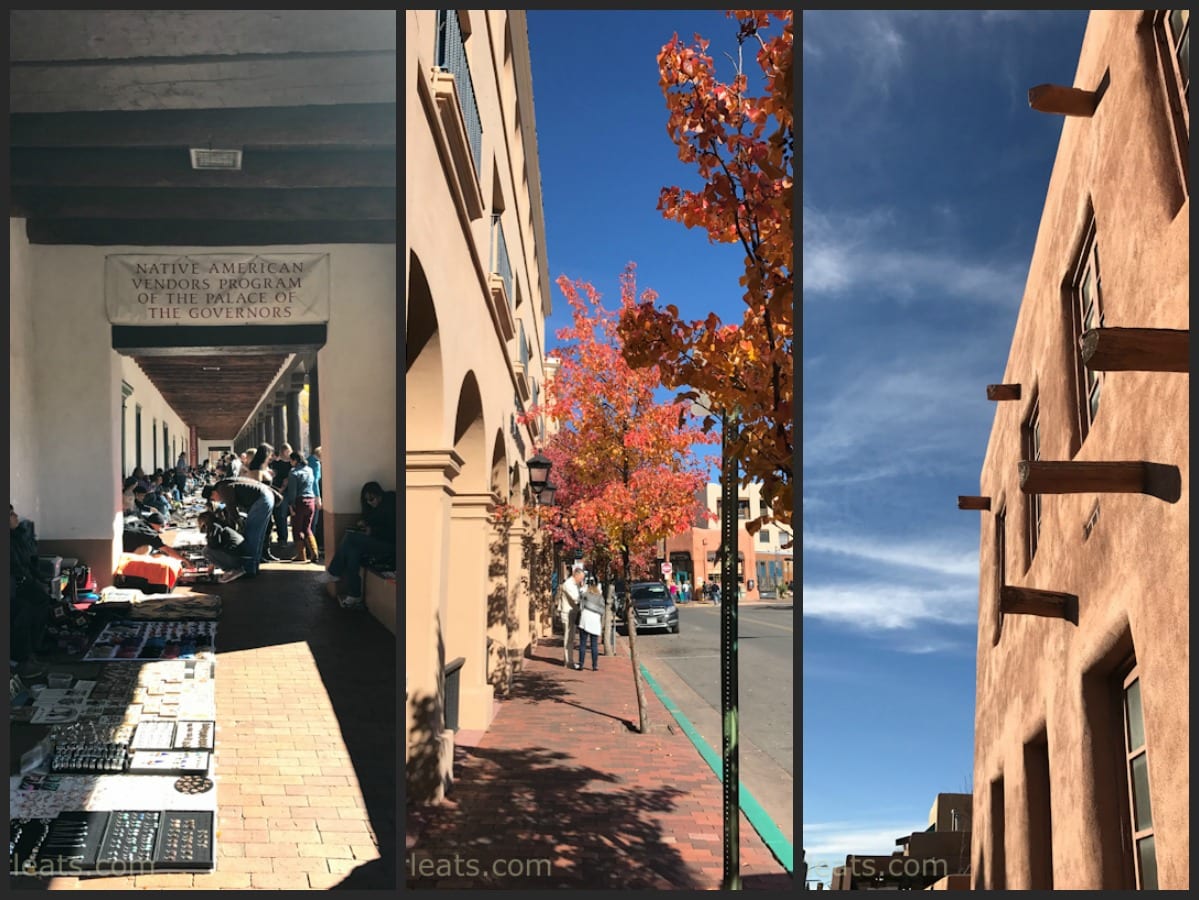 Palace of the Governors just off the plaza is where you can purchase Native American crafts, jewelry and art.

The six of us met up after lunch, and headed to Canyon Road which is filled with art galleries. Since Santa Fe is so small, you really don’t need to drive around. Everything is within a mile or so of the plaza.While the rest of the ladies were shopping, I met with Joanne, the Public Relations Manager for Santa Fe, at the Kakawa Chocolate House to sample some of their drinking “elixirs”. 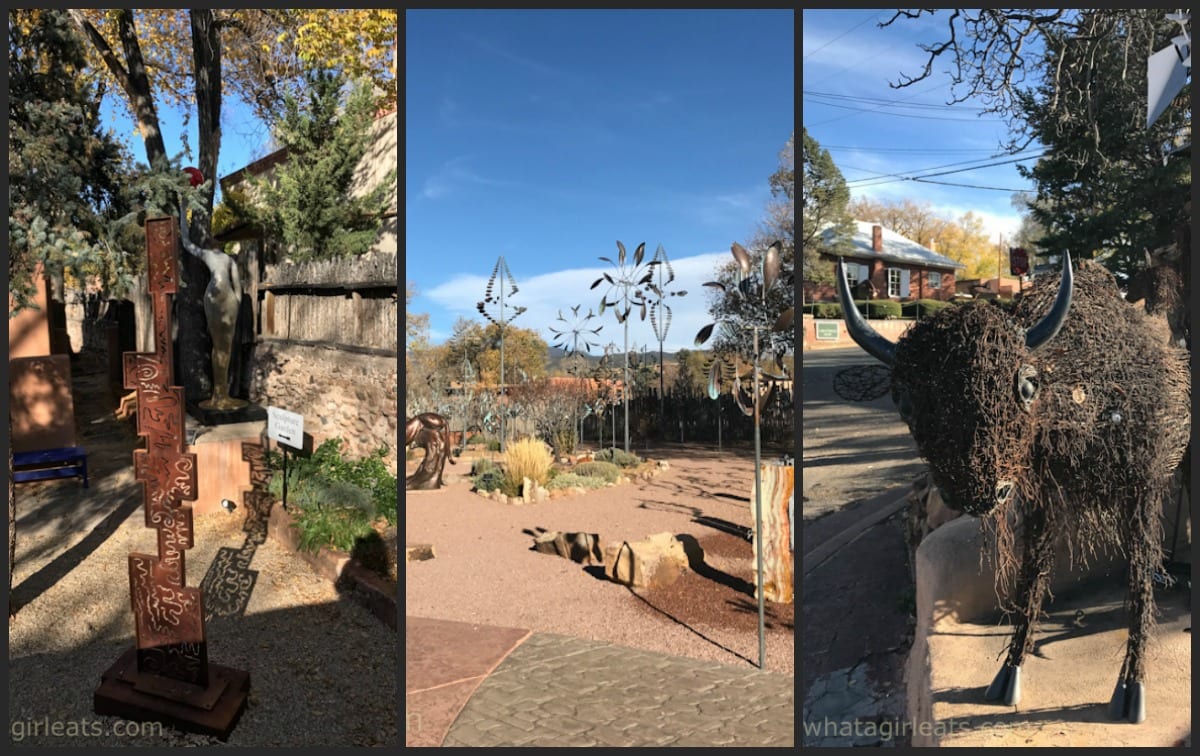 This is the perfect place to stop after a walk on Canyon Road! There is a wide variety of drinking chocolate, and you are free to sample as many as you’d like, before deciding on one. There are both Mesoamerican elixirs, and European, (think, what would Thomas Jefferson drink?). This is not a big mug of hot cocoa, but rather the “espresso” of hot chocolate. It is served in tiny chocolate cups and meant to be sipped. For something unique and typically New Mexican, try one of their elixirs with chile! 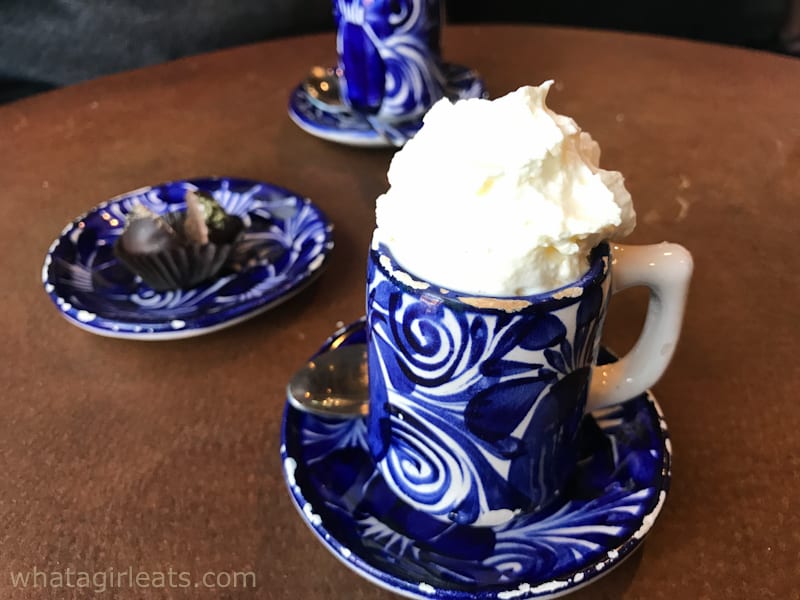 A visit to Santa Fe would not be complete without a stop by the Loretto Chapel and the “miraculous staircase”! In fact everywhere you look there are reminders of the strong Native American, Spanish and Mexican influence. Santa Fe is definitely doable for a 3 day weekend, but I would love to have had an extra day or two to experience more of Santa Fe. 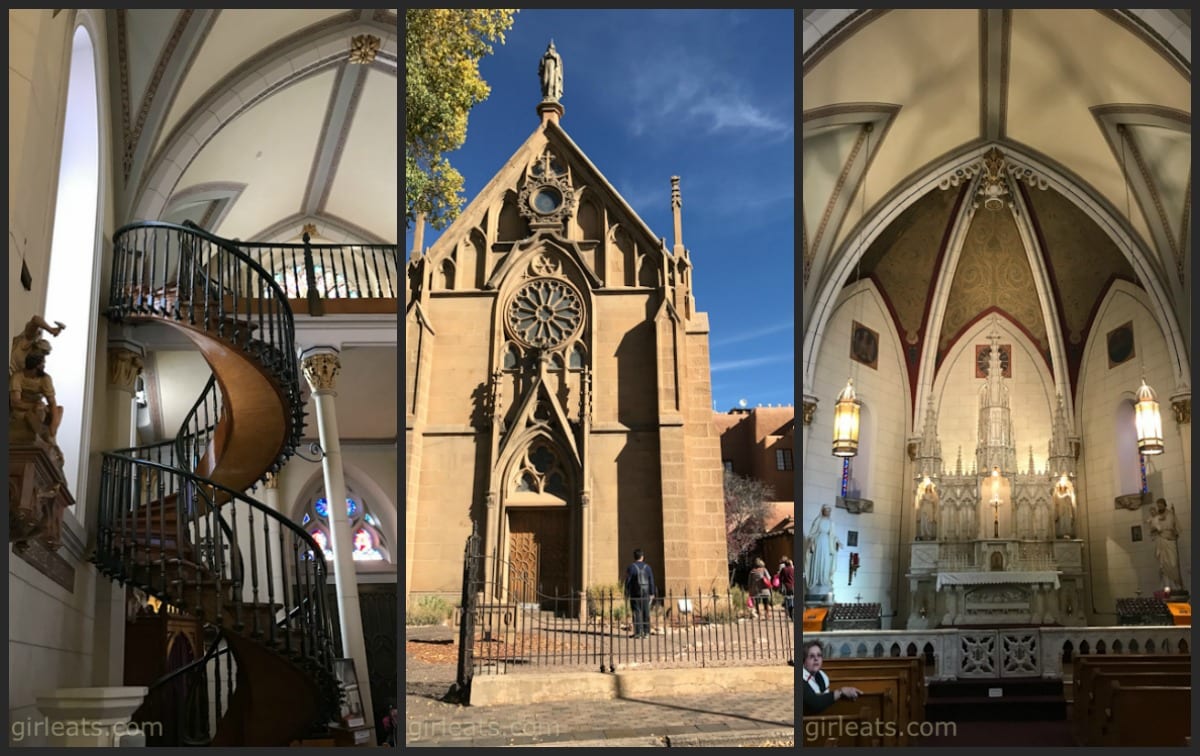 While our Girl’s Weekend in Santa Fe was the perfect blend of fun, relaxation and food, Santa Fe would also be great for a Romantic Weekend!

Have you ever been to Santa Fe? What would you add to this itinerary? 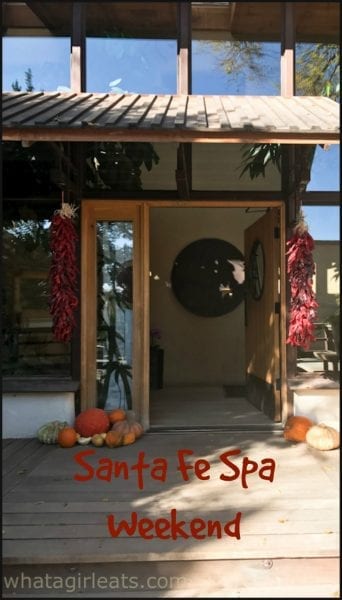 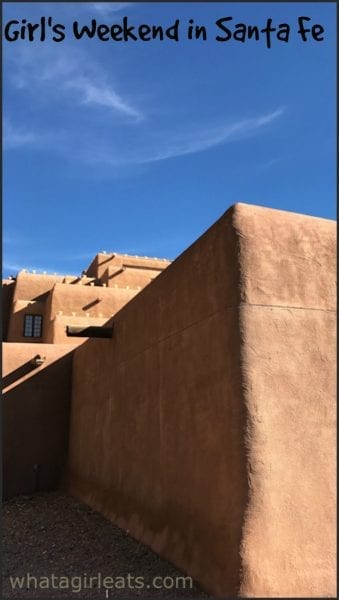