When Spencer and I were in Mendocino, in Northern California, last month, we were offered a third night and a chance to stay in the James Dean Suite at the Little River Inn, we jumped at the chance. After a couple of relaxing days at the Brewery Gulch Inn, we were ready to see more of Mendocino. Spencer’s sister and brother-in-law joined us for this part of the trip, which made exploring Mendocino even more fun! 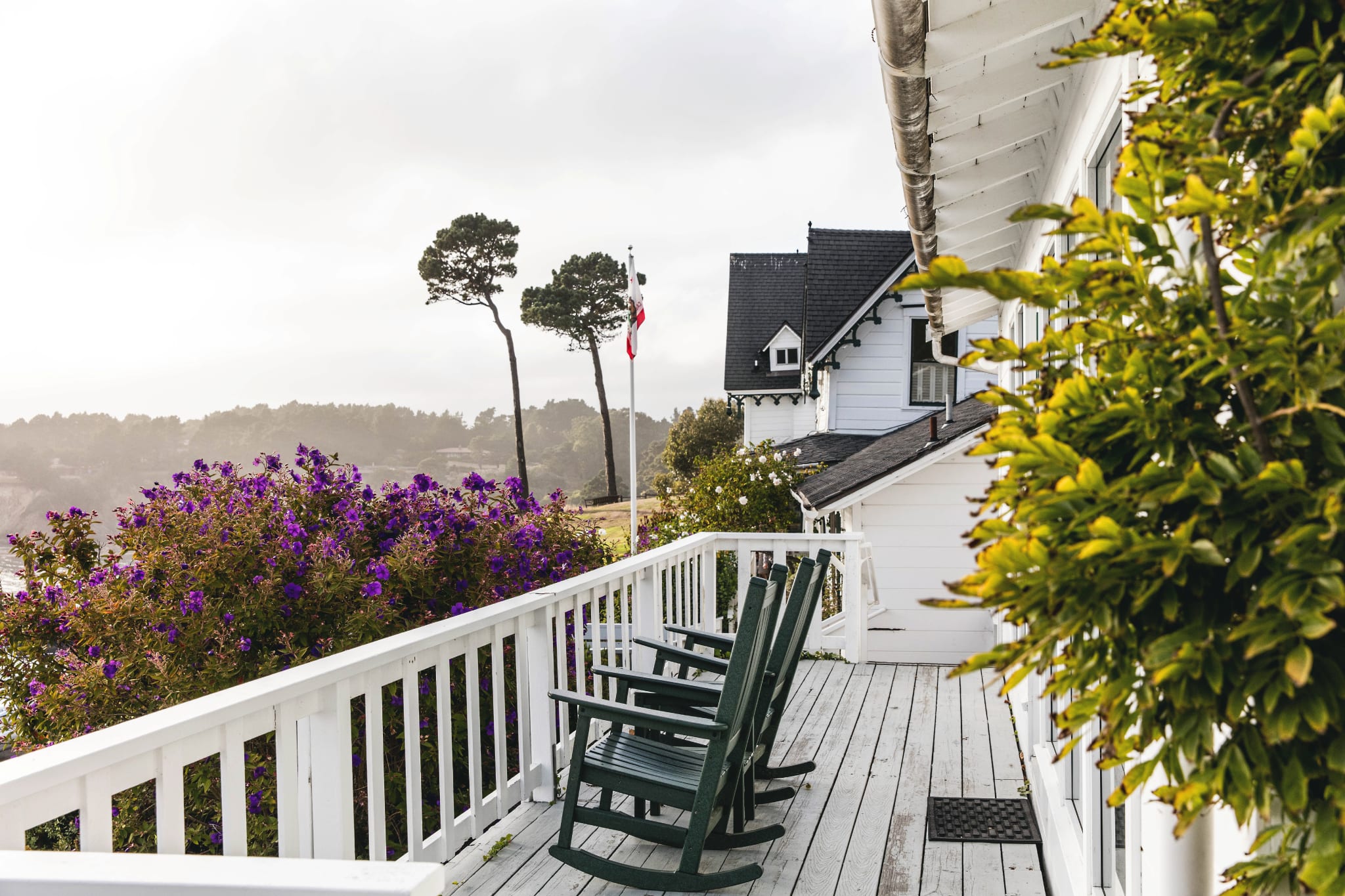 Here’s all about the James Dean Suite at the Little River Inn and What to do in Mendocino.

If you read my last post, you will know that we had never been to Mendocino until then. We were excited to learn we would be staying at the historic Little River Inn, not just in any room, but the James Dean Suite. Disclosure: I was given a night’s stay and dinner at the Little River Inn, as well as admission to the Mendocino Botanical Gardens and Skunk Train. I was under no obligation to write a favorable review. As always, my opinions are my own. 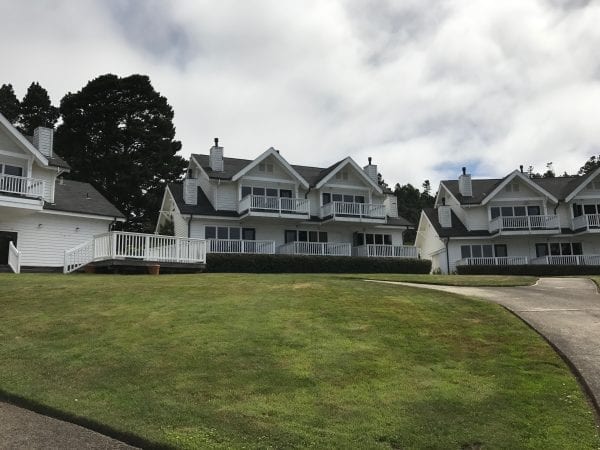 After doing a bit of online sleuthing, we found out that James Dean stayed in the very suite we’d be staying in, when he filmed East of Eden. A little more curious, it led us to research what else might have been filmed in Mendocino. While there are too many to list; the first movie shot in Mendocino was in 1904. You might remember Same Time, Next Year, with Alan Alda and Ellen Burstyn, Summer of 42, Forever Young, or Racing With The Moon. Mendocino also doubled for Cabot Cove in the Murder She Wrote television series.

Stop by the Ford House Museum, which houses the visitor’s center, on the aptly named “Main Street”, where you can pick up a brochure and take a self-guided tour of the films and shows shot in Mendocino County. 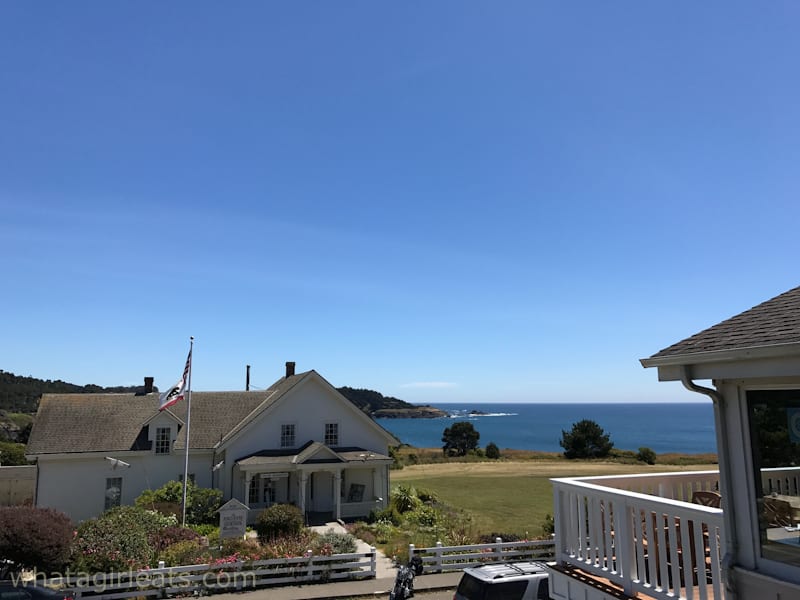 The Ford House Museum on Main Street in Mendocino, overlooks the bay.

The town of Mendocino is still very quaint, with a population just under 900. Many of the buildings are original, and one can imagine burly lumber jacks from the 1850s, John Steinbeck, or James Dean walking the boardwalk overlooking the bay. 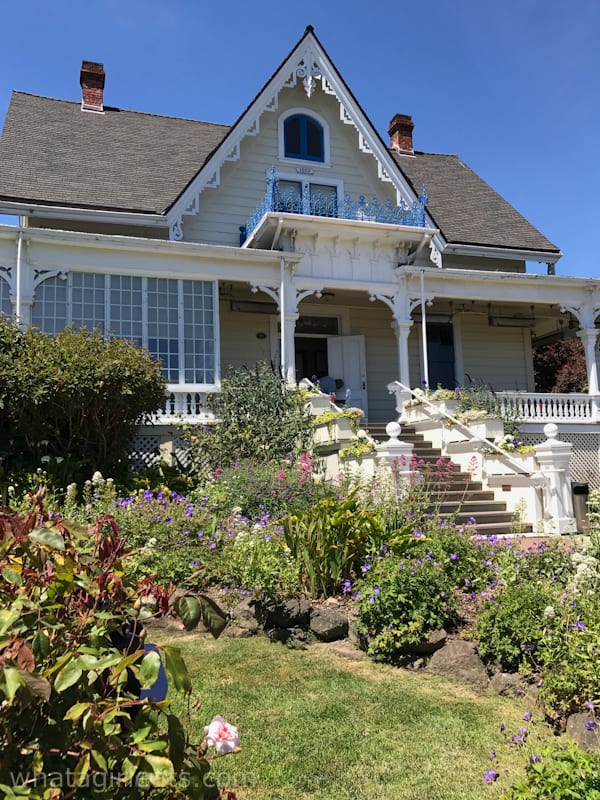 Many of the houses are beautifully kept Victorian homes like this one.

The Little River Inn, built in 1857, sits on the highway just a few miles from the town. With 66 guest rooms, 63 of which have ocean views, a bar, restaurant, tennis courts, 9 hole golf course, and spa, there is plenty to do. 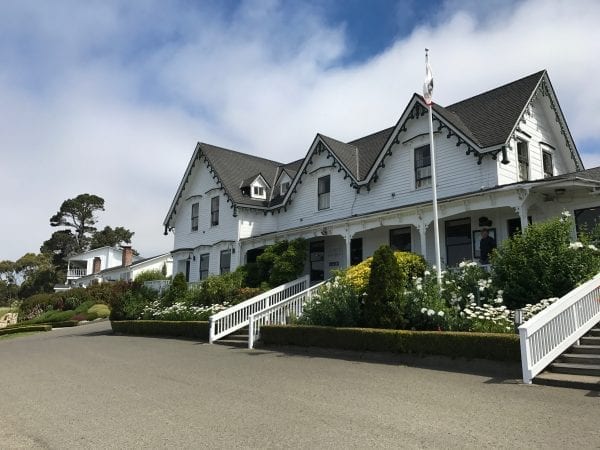 Our suite was in the front of the inn, overlooking the bay, with an outdoor deck and chairs to enjoy the sunset or just relax. The property is over 200 acres of woods, gorgeous plants, and flowers. The Matilija poppies are spectacular, and were in full bloom when we were there in mid-June. 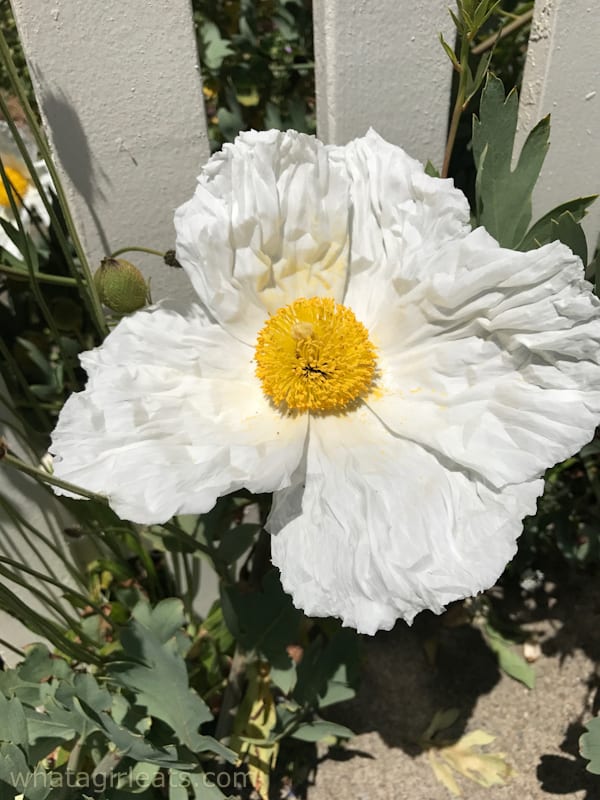 But here’s one of the best things about the Little River Inn…it’s pet friendly! Not only can your pet stay, they have “pet dining areas”. Our room was large and comfortable, with a fireplace and chairs, small bar area, and a jacuzzi tub in the bathroom. 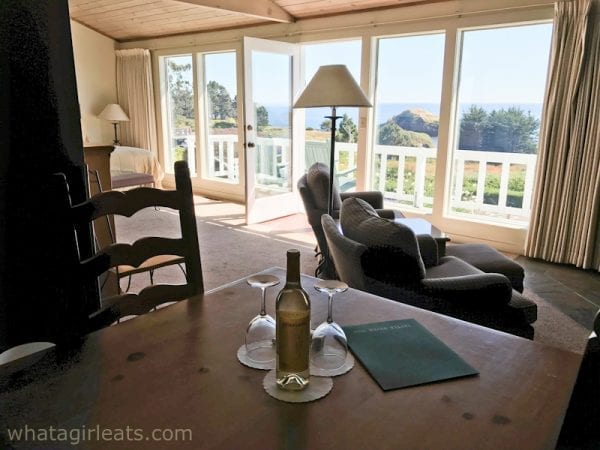 A room with a view…and a fire place and a deck!

One side was just a huge bank of windows overlooking the bay. 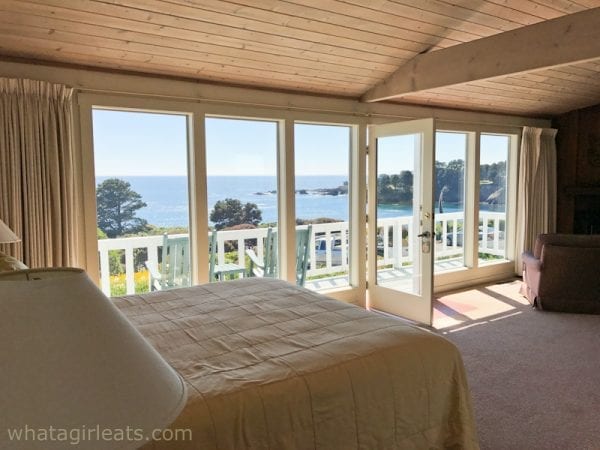 It was lovely to sit on the deck, nibbling on cheese and sipping wine while we watched the sunset. (There’s a small market a few hundred feet across the road, with a surprisingly extensive selection of gourmet wines and cheeses). 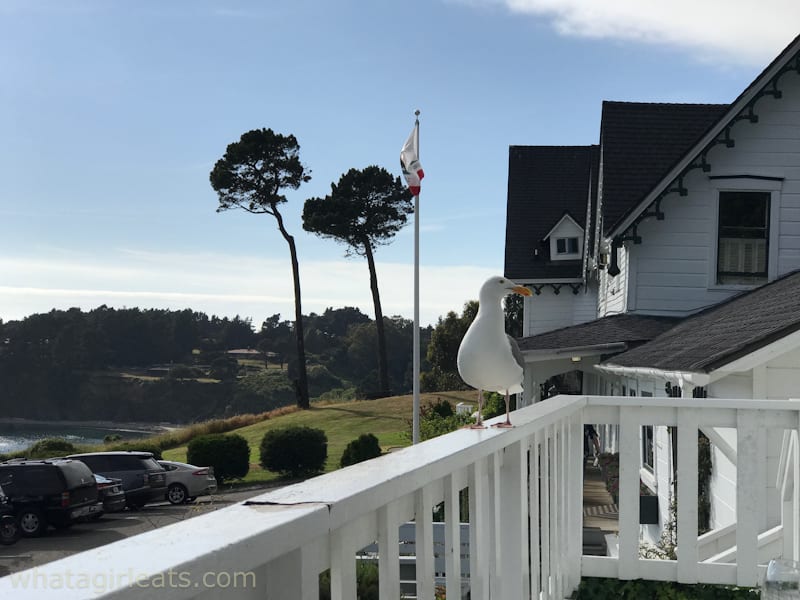 This seagull wanted something to eat while we were relaxing. Clearly this was not his first rodeo!

The Little River Inn restaurant is well-respected in its own right, and guests come from all over the county to eat there. There is Ole’s Whale Watch Bar located in front of the restaurant, is for lighter, more casual fare. 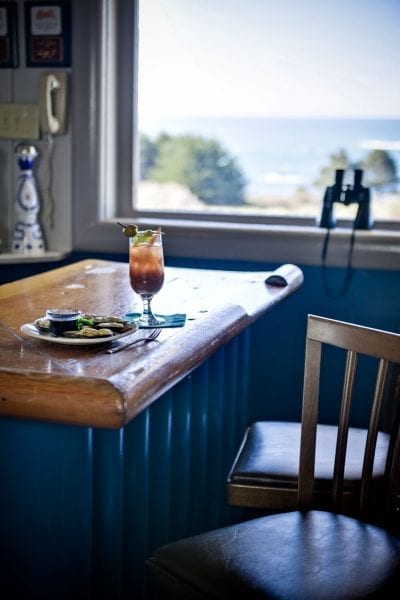 Fish and chips, burgers, sandwiches, and salads are featured. One can enjoy a meal, have a cocktail and enjoy a view of the bay in a more relaxed atmosphere. We had heard from the Brewery Gulch Inn that the Little River Inn restaurant was good, so the four of us decided to each try something different and share. 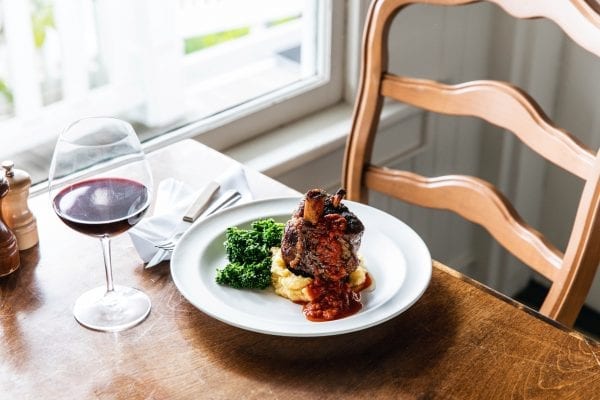 We each had a salad; both the Caesar and the Wedge with Bleu cheese and Roundman’s bacon were spot-on. Spencer had the Wild Boar Ragout in a tomato and mushroom sauce over pasta, that he loved. When I see Bouillabaisse on a menu, I always choose that, and I did. The saffron laced fish stew is one of my favorites, and not one I am apt to make at home. It did not disappoint, it’s hearty and light all at the same time and packed with fresh mussels, scallops, clams, shrimp and bassa.

My sister-in-law Julie, chose the Steak Diane, and Wally, her husband, chose the hailbut. Everyone was more than pleased with their dinners. The next morning we all had breakfast in the light and bright room overlooking the bay. Breakfast options are hearty and there was even a vegan “Huevos Rancheros” option. 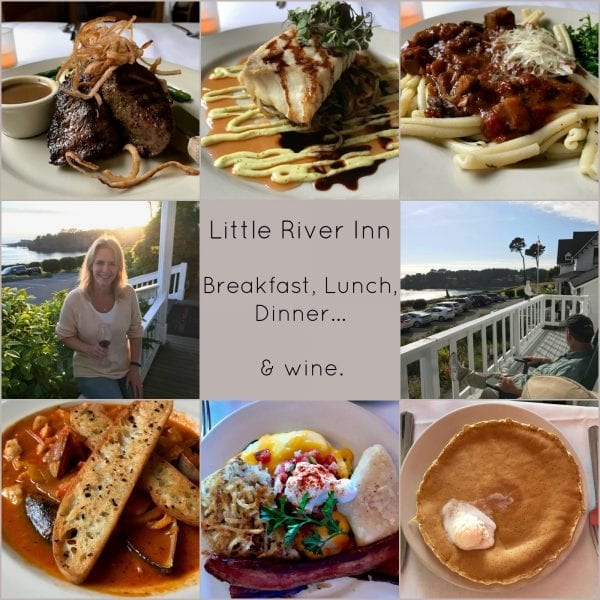 What To Do In Mendocino

On our second day, we took the Skunk Train, just north of Mendocino, in Fort Bragg. Unfortunately, the tunnel had collapsed on one section of the tracks. We were only able to go about 7 miles, round-trip, on the Pudding Express, through the redwoods. I really would love to go back and take the train the entire route which goes on a trestle further into the forest. It’s easy to imagine how the loggers transported the lumber over 100 years ago! The repairs are set to be completed in 2018.

When you first enter, you’ll find plenty of manicured gardens with rhododendrons (they have over 125 varieties!), magnolias, succulents and a Mediterranean garden. Walk further down the path, and you’ll enter the only National Monument to adjoin a botanical garden in the world! Here you’ll find magnificent views of the Mendocino coast. The walk alone to the ocean it worth the price of admission. You can find out more about the Mendocino Coast Botanical Gardens HERE. 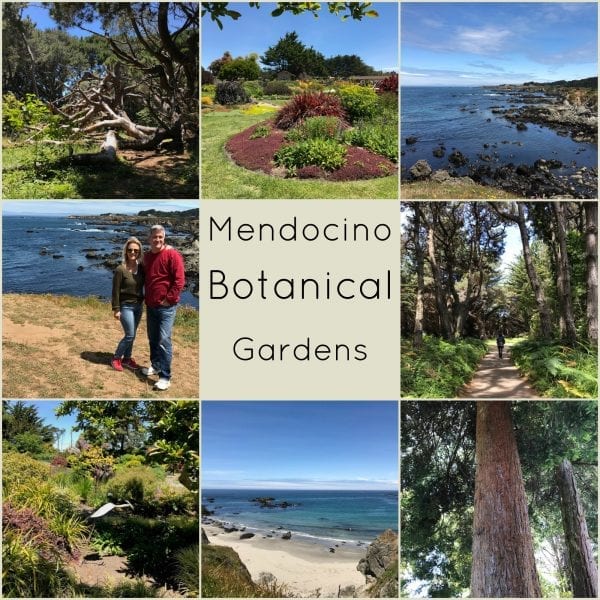 As we were walking back through the trees, I couldn’t help imagine what the Native Americans who called this  their home, thought about living in such a beautiful place. The forest would have been full of game, the oceans full of fish and shell fish. There was plenty of natural shelter and wood, to build dwellings; The Island of the Blue Dolphins is another movie that was filmed along this coast.

In between the Skunk Train and Botanical Gardens we walked the streets of  Mendocino and stopped by the many art galleries and shops. Next we took a walking tour and tried to find as many film locations as we could. The hilly streets were a nice work-out and built up an appetite for late-afternoon cocktail. We stopped twice by the historic Mendocino Hotel on Main Street, for liquour-laced coffee, (they have several) and cocktails, at the end of each day. 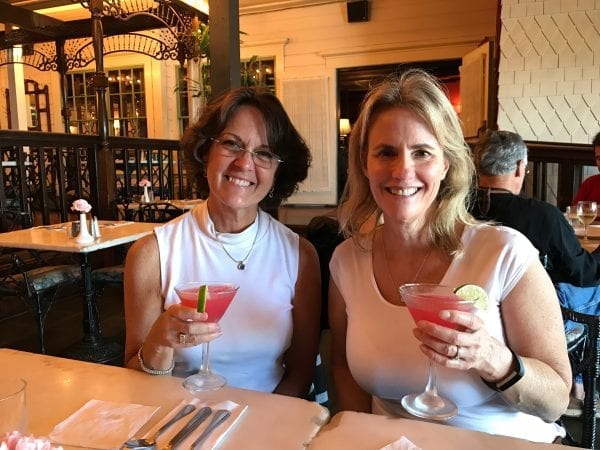 Cocktails at the Mendocino Hotel after a hard day of sightseeing with my sister-in-law, Julie.

I finished our relaxing few days with a massage in the spa. I opted for the classic one-hour massage, but they offer warm stone massages, deep tissue, and in-room massages in addition to the usual spa services. 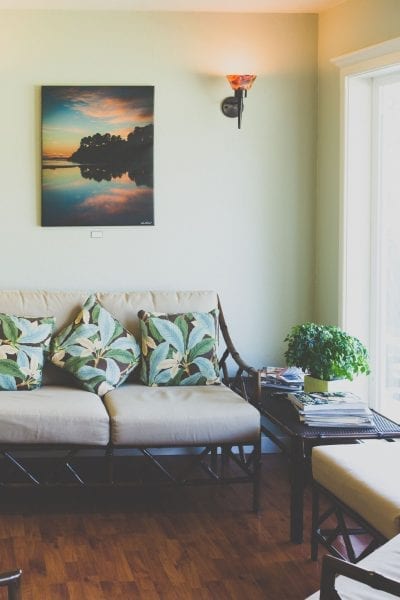 What a perfect way to end a glorious vacation! One month later, and I still have Mendocino listed on the weather app on my phone. I haven’t mentioned the weather yet. While we in LA will be sweltering in the mid-90’s the first week in August, Mendocino’s temperatures will be in the low 70’s! Yes, I’m still dreaming about going back to Mendocino, I think next August sounds perfect!

Have you ever visited Mendocino? What’s your favorite place to visit in your state?