Grain free apple walnut bread is a moist quick bread with apples, cinnamon, walnuts and lots of flavor! It’s hard to believe that this delicious treat is grain free! 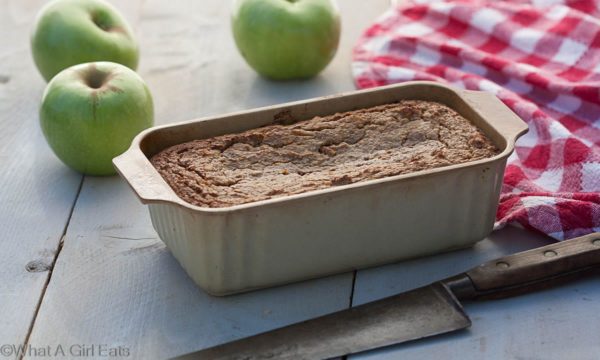 I began reading Wheat Belly, by Dr. William Davis several years ago. I’ve been off wheat products pretty religiously for about 1 month and have lost about 7 lbs. without really trying. People have started to really notice the changes as well. My stomach is flatter than it was pre-childbirth, (flat, not toned…yet!) and my clothes are slipping off. I’ve been trying to get my 17 year old to go wheat-free as well.

This past weekend I tried on her bikini. When she saw me in it, she said, “That’s it. I’ve seen what’s happened to you this past month, I’ll do whatever you tell me to do!”

I used to think that gaining those extra pounds was inevitable with aging. “They” tell us that the average person gains about “10 lbs. a year after 40”. And women in menopause? Forget it! We aren’t suppose to lose weight in menopause! Yet, losing I am, without hunger, without crankiness, and without sagging skin. It’s the easiest “non-diet” I’ve ever been on.

If you don’t really want or need to lose weight, there are a host of other health problems associated with wheat and gluten. Wheat consumption can lead to auto-immune diseases, contribute to arthritis, diabetes, asthma, weight gain, high blood pressure, high cholesterol and skin problems to name a few. Men…do you have a “wheat belly”? Hair loss? How about “man boobs”? Wheat increases the estrogen in your body…who had “man boobs” 30 years ago? I would think the hair loss and man boobs would be reason enough to try going wheat/gluten free for a week or two. BUT I EXPECT YOU TO BE SKEPTICAL!

Don’t believe me, try it yourself. Read the book. (I wish I could say I was making a commission for promoting this book, but I’m not.) When I announced my “wheat free” challenge to the family, Spencer was all for it. He tries to eat a mostly wheat/gluten-free diet to combat his allergies. Sophie, my 11 year old, was not so happy. She’s actually been wheat/gluten/cow dairy free since she was 4, when I finally took her to a holistic practitioner. Conventional doctors couldn’t/wouldn’t solve her persistent cough, allergies and asthma. She was on antibiotics, atomizers, allergy meds and a nebulizer. Within days of the holistic practitioner telling us to take her off of gluten and cow, she regained her health and today only lapses into those symptoms when she “cheats” with cow or wheat.

Lately she’s been cheating A LOT, so she was none too happy. “WHY won’t you let me LIVE?! We have nothing to snack on!” I feel no sadness or remorse. OK, well maybe a little.

To soften the blow, I picked out one of Dr. Davis’ grain free apple walnut bread recipe, hoping to win her over.

Don’t make the apple walnut bread expecting something that will be overly sweet and “bread like” in it’s consistency. However, it’s satisfying and will curb a sweet tooth, if you actually have one after going grain free.

Serve apple walnut bread for breakfast with cream cheese, nut butter, or plain butter. It should tide you over until lunch. Or have it as dessert with a little honey…no guilt! 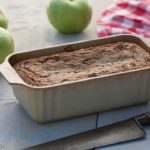