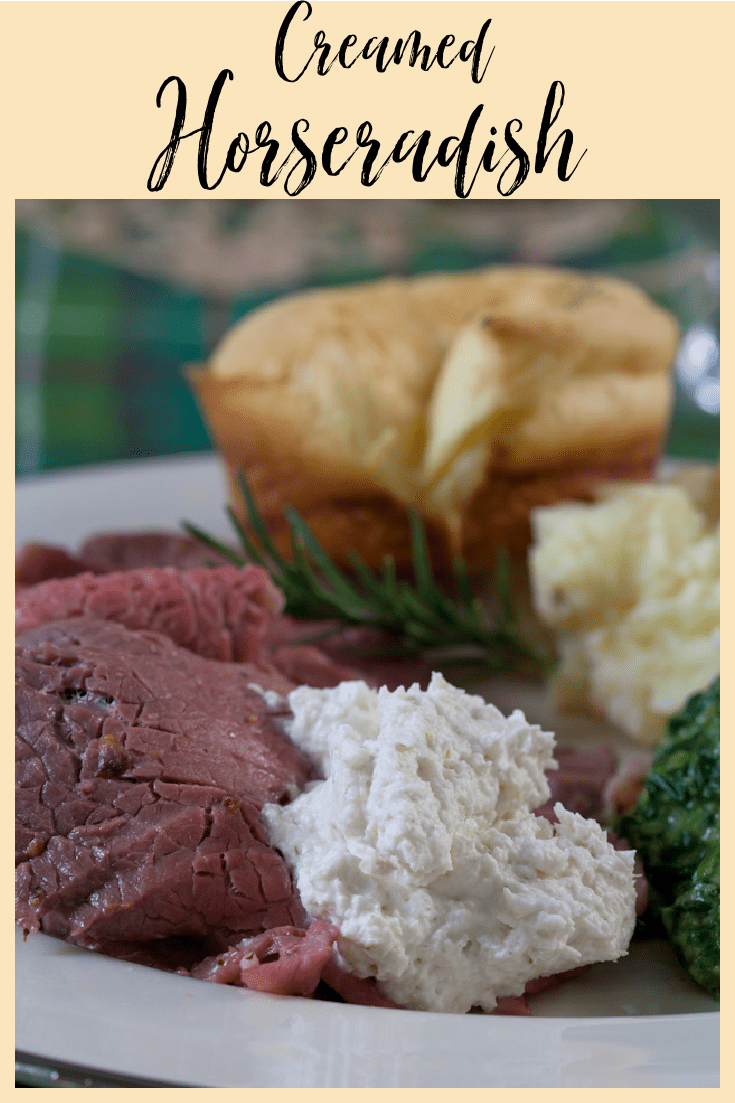 This creamed horseradish sauce is mixed with whipped cream that gives just enough of the horseradish kick without being overwhelming. This a very old recipe from the Time-Life Cooking Series, Recipes of the British Isles, that came out in the 60s.

My mom has been using this recipe for 50+ years. (This post was originally published on December 4th, 2013 as part of my Prime Rib recipe. It has been updated to contain nutritional information. As an Amazon Affiliate, I earn commission on qualifying purchases.)

Horseradish is a plant that’s cultivated mainly for its roots. Its native to Central and Eastern Europe. Horseradish has very little odor until it’s cut or grated. For this recipe, you’ll want bottled horseradish, not creamed, as the flavor will not be as intense.

How to make homemade horseradish sauce

Don’t be tempted to substitute Dijon mustard as it won’t have the same flavor or consistency. It’s important to drain as much of the liquid out of the horseradish as possible before incorporating it into the other ingredients. Squeeze any liquid out in a clean, dry towel.

Then beat the whipping cream until it forms stiff peaks. Gently fold the horseradish mixture into the whipped cream. Taste and adjust seasoning.

Can horseradish sauce be made ahead of time?

Because it’s made with whipped cream, I wouldn’t recommend making it the day before. I usually make it about 2-3 hours ahead of time and refrigerate until ready. In fact, it tastes better if the flavors have a chance to meld. You mix all the ingredients together except the whipped cream, and refrigerate. Then whip the cream and finish the recipe just before serving.

This recipe contains a mere 2 teaspoons of sugar for 8-10 servings. But if you are very sensitive to sugar, you can easily substitute swerve or your favorite sugar substitute.

Cynthia
This horseradish sauce is lightened with whipped cream. The recipe is from the Time-Life book Cooking of the British Isles. It's delicious on prime rib or roast beef. The recipe can be doubled.
5 from 7 votes
Print Recipe Pin Recipe Rate this Recipe
Prep Time 10 mins
Cook Time 5 mins
Servings 6 people
Calories 76 kcal

« How To Make A Charcuterie Board
Easy Chocolate Fondue Recipe »