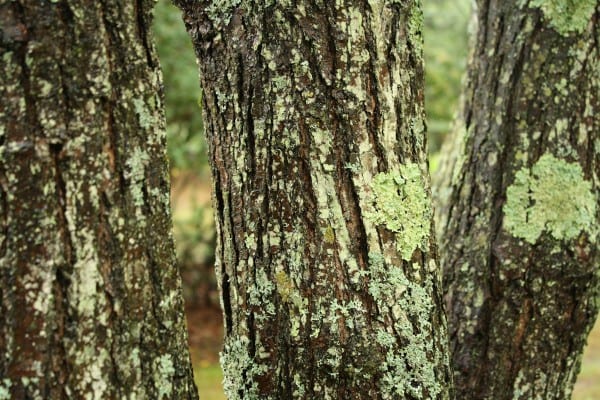 I think that I shall never see

a poem as lovely as a tree.

A tree whose hungry mouth is prest

Against the earth’s sweet flowing breast;

A tree that looks at God all day,

And lifts her leafy arms to pray;

A tree that may in Summer wear

A nest of robins in her hair;

Upon whose bosom snow has lain;

Who intimately lives with rain.

But only God can make a tree.

First an apology. There will be no recipe in this post. Only a story. If you really want something that fits the post, how about a salad with hearts of palm or oak leaf lettuce? 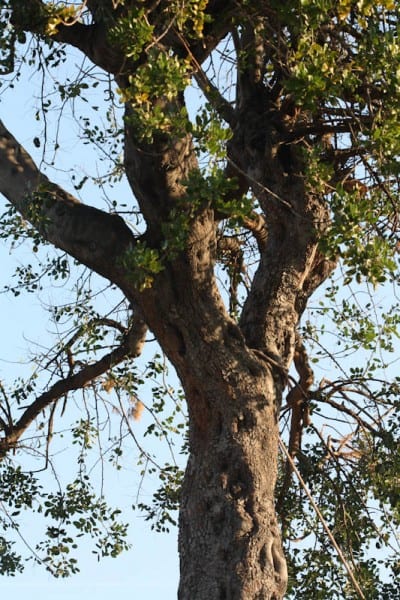 The shorter half of tree

His story needed to be told. Or at least I needed to tell it. Sometimes the words settle and wait quietly for a recipe. And sometimes, like flames, they shoot from my fingertips and if I don’t write them down they burn in me until I can release them.

I could never live in a brand new house in a “development”. While I have nothing against new houses in particular, they lack trees, big trees anyway and I need trees. I’ve no deep love for the house I live in. It was chosen by Spencer when I was 6 months pregnant. I chose the street. I fell in love with it long before we moved here. Big, leafy old trees lined it. I say lined, because over the past ten years, they’ve slowly been removed. The city would spray a big pink mark on a trunk and you’d know that soon another tree would come down.

Our Tree was the tallest on the street. It was a landmark. I would use it as a guide to anyone who had never been here before. “South side of the street, look for the tallest tree”. It wasn’t a particularly beautiful tree. It was dying. Spencer wanted it gone. Its huge roots had long before popped up the sidewalk and probably entwined themselves around our plumbing. He had called the city many times asking when it would be removed. While I understood that it probably should be taken down, I secretly hoped it would stay.

Every time the Santa Ana winds kicked up, Spencer would always worry about the Tree falling and crushing our roof. Early in the morning of December 1st, it finally came crashing down during the hurricane force winds that hit Pasadena and surrounding areas. The 100 mph gusts came thundering through the San Gabriel corridor, leaving a swath of devastation in its pathway. It was one of the few nights I’d slept through, until he awakened me at 4:30 am. “It’s the Tree“, he said. “It’s fallen down“. The power was out, so we could do nothing but sit in darkness until the sun came up, to see what damage was done. 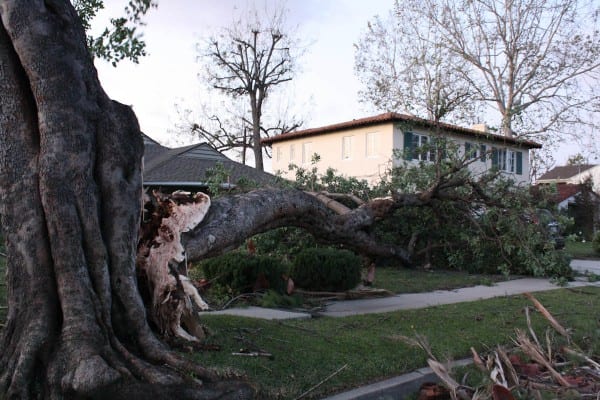 Tree had fallen across the sidewalk, driveway and on both Spencer and Emma’s cars, demolishing Spencer’s and damaging Emma’s. Both were buried under Tree’s massive branches. Pasadena lost over 1,000 trees that day. Every street was hit. Every person had a story. Depending on your point of view we were lucky or unlucky. As my mom would say, “no one died“. 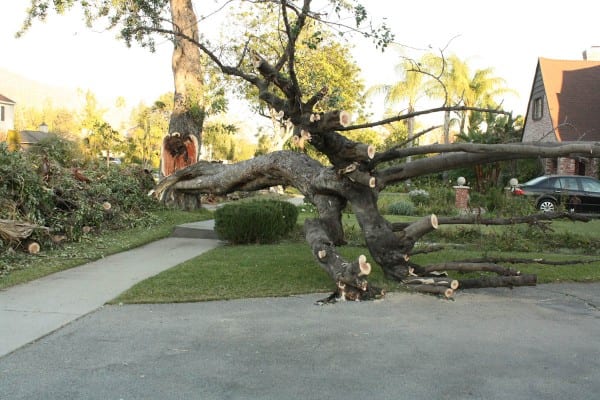 Tree, lopped and trimmed…debris piled 6ft. high the entire length of the property.

But that day Tree died. Part of his body lay stretched out over our lawn. Spencer had to hire a couple of guys that day to remove enough of Tree so that we could get the one remaining car out of the garage. It took a full two weeks for the city to remove the large half of tree. The rest of Tree waited. Our Christmas decorations were late. Everybody’s were. We all said it was because of the winds. We decorated Tree for Christmas with red bows. People continued to drive by slowly, taking pictures of Tree. 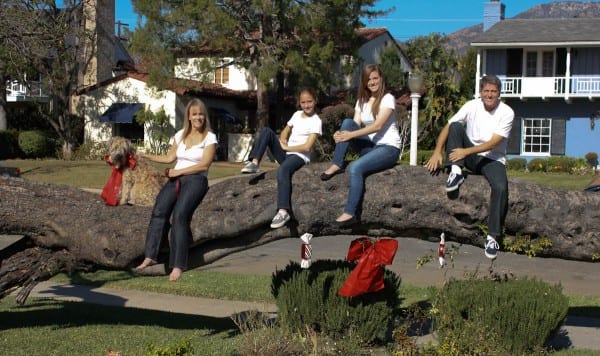 Then exactly two months later, the door-bell rang at 7:30 am. They were there to remove the rest of Tree. I wasn’t prepared for Tree to go just yet. I needed to take more pictures of him…to touch him once more. I had to go to work. I wanted to stay. Sophie was beside herself, sobbing. “The eye! Get the eye!”, she shouted. We’d attached ceramic eyes and a nose high up in the tree long ago. And long ago the nose was taken. Then an eye fell down. I’d saved it. Only one eye remained. Spencer got on a step-stool to fetch it. “Please take pictures!” I begged as I dashed out the door. I would be late. They had to block off both sides of the street. I had to weave between orange cones and barriers to get out. Two huge trucks and several men were there to complete the job. 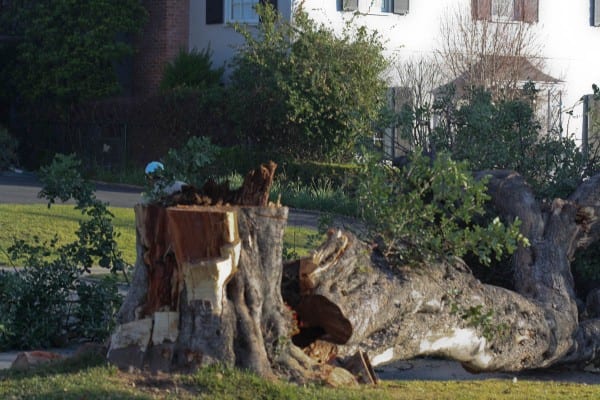 Just after Tree was felled.

I rushed home that day, before I picked up Sophie. I want to see what was left of Tree. I wanted to touch the wood. Feel it. I wanted to get my nose right up and sniff him one last time. I wasn’t prepared for the lump in my throat. The feeling of fighting back tears. It was just a tree after all. Almost on cue my 80 year neighbor, Bill, met me at the still raw stump. “It felt like an earthquake when it fell“, he said quietly. I think he wanted to offer his condolences, but couldn’t. It was just a tree after all. We stood there together, staring at the stump, and its jagged edges. There wasn’t much to say. It was just a tree. I took more pictures, I don’t know why. I measured the diameter of the trunk. I don’t know why. In the grass were the deep impressions where Tree had lain. 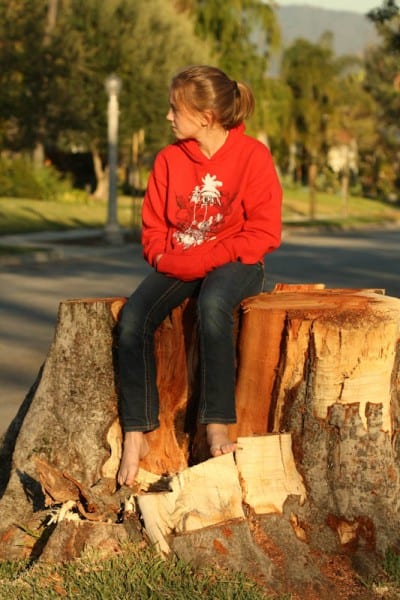 When I picked up Sophie, her eyes were still puffy from the morning. When she saw the stump again, she burst into tears and recounted the whole horrible amputation, down to the final blow. She welled up for days. “It was my Giving Tree”, she said thinking about the Shel Silverstein book. She’d asked the tree guys to save her a sliver from one of the larger branches as a memento, and on it, she placed the one remaining eye. I found the other eye just a few days ago, which reminded me that I needed to write Tree’s story. 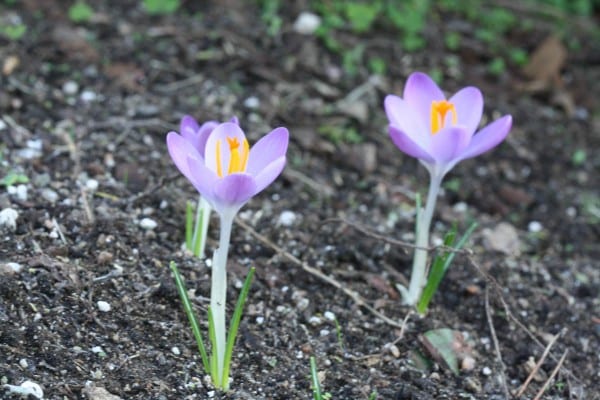 The same day Tree died…I saw these crocus emerging in my garden.

But maybe this story is not about a tree after all. Maybe, just maybe, this is a metaphor for someone I’ve lost. Someone you’ve lost. Someone we’ve all lost. And yes, it was just one tree, but it was our tree.

Home » Miscellaneous » Ode To A Tree