Looking for another marinade for this summer’s meals? This Cilantro-Garlic Marinade is an adaptation of recipe from a few years ago. It’s also Paleo and Whole30 compliant if you’re watching your carb intake, but even the carb lovers can use it to fill a tortilla!

This post may contain Amazon affiliate links for your convenience, at no additional cost to you. 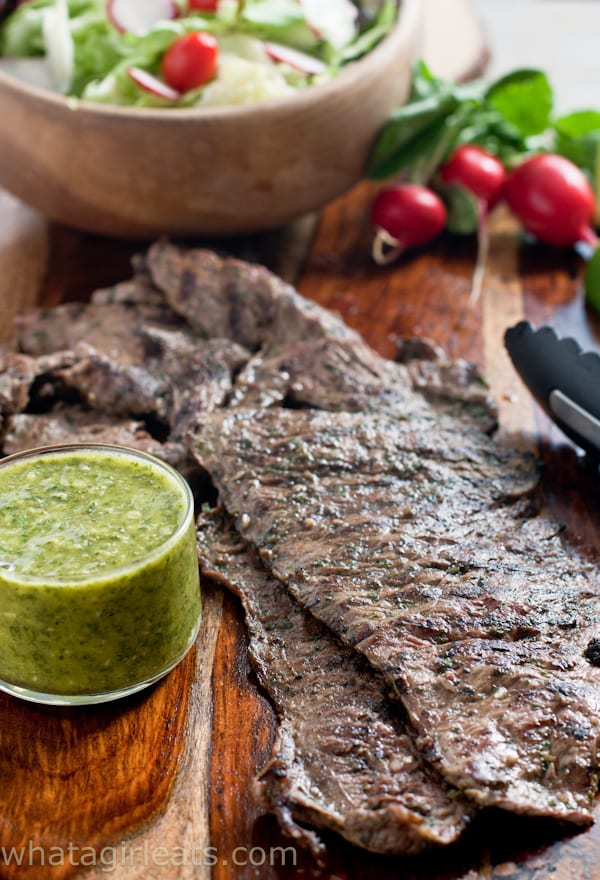 A few nights ago we dined out with friends at an Argentinian restaurant in town. I had the paella, and Spencer ate the skirt steak with chimichurri sauce. After a few “samples” of his dish, I realized it was similar to the sauce for this Cilantro Rice dish. I wondered if I could adapt it, and get the same delicious results. 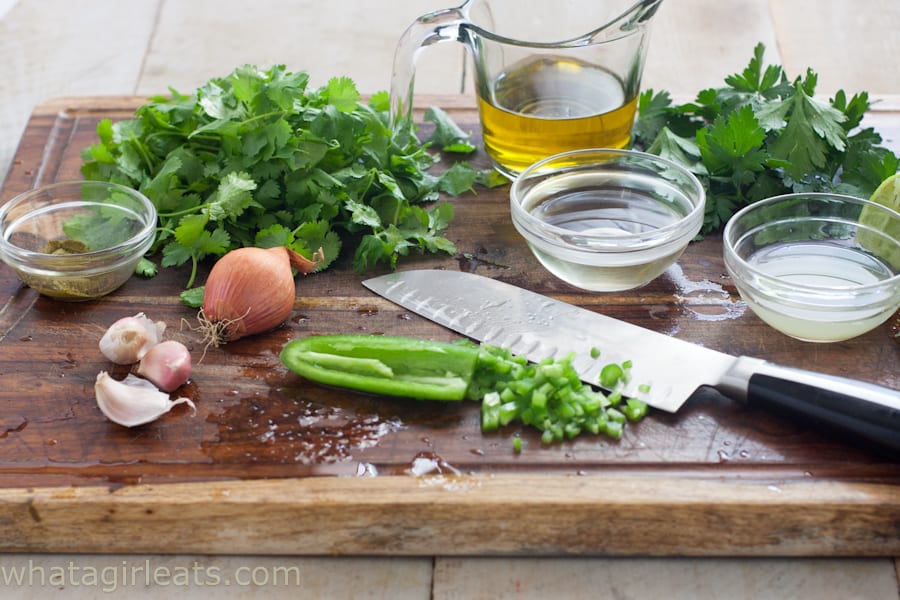 Simple ingredients. I used a half of a jalapeño, but feel free to use the whole chile if you like more heat!

Even better, the recipe is perfectly Whole30 compliant. Win-Win! Since I wanted this to double as a marinade and dressing, I made a few adjustments to quantities and subbed the ground cumin for oregano, added more garlic and a shallot. I know 50% of the population does not like cilantro one bit. If you’re looking for some Whole30 recipes that do not have cilantro, you might like Singapore Hot Pot or Whole30 Tomato Mushroom Spaghetti Squash. 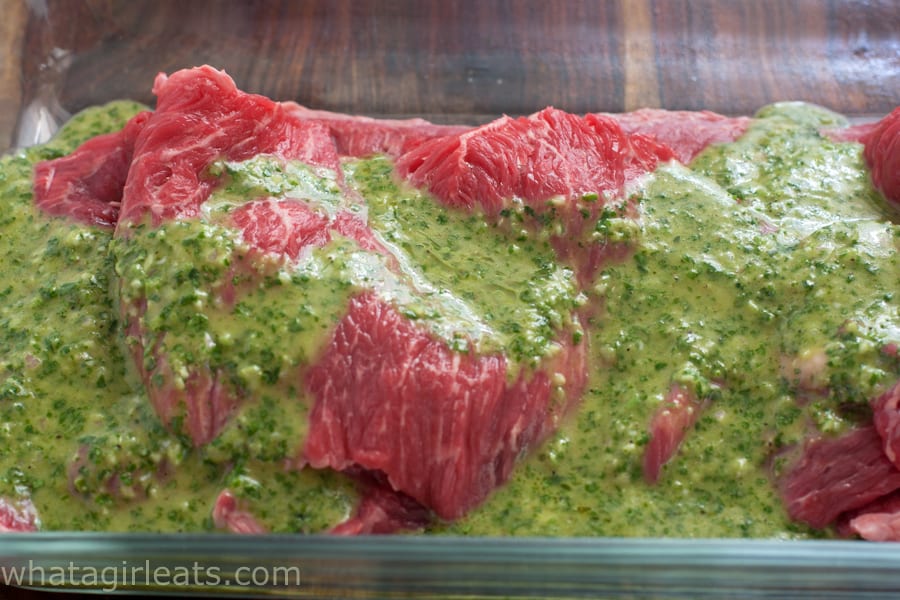 You will use half the Cilantro-Garlic marinade for the meat, and half to serve with the meat, either on a salad, as I did, or in a tortilla as Spencer did. 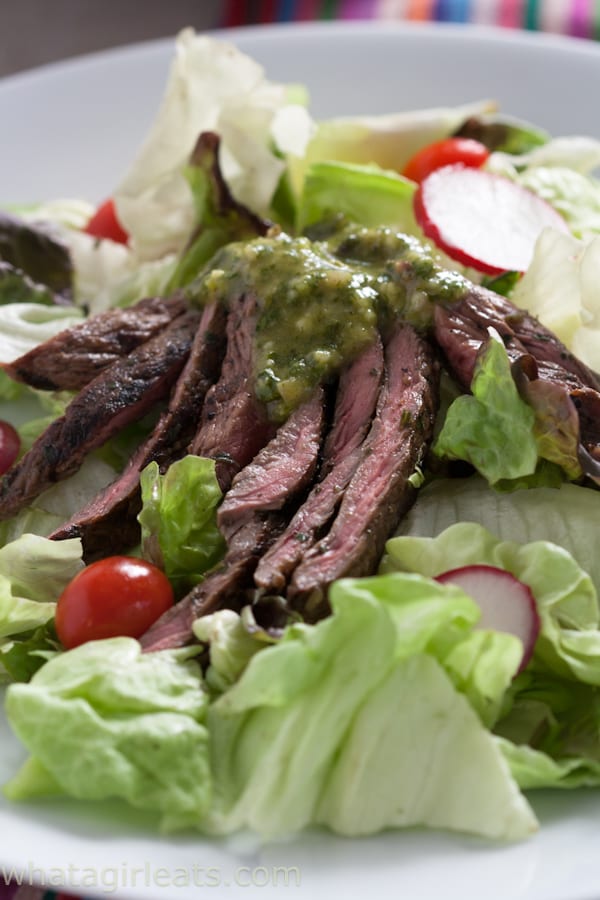 I used flap-meat for this recipe, but skirt or flank would work just as well. Flap-meat is thinner and takes just minutes per side. So even though marinating takes some time, if you marinate the meat the night before, you could have dinner on the table in under 30 minutes. I grilled this, but you can easily pop in under the broiler. Slice it thin and against the grain. What to learn more about the difference between marinate and marinade? Click on one of my very first posts; Marinade, Marinate, Macerate. 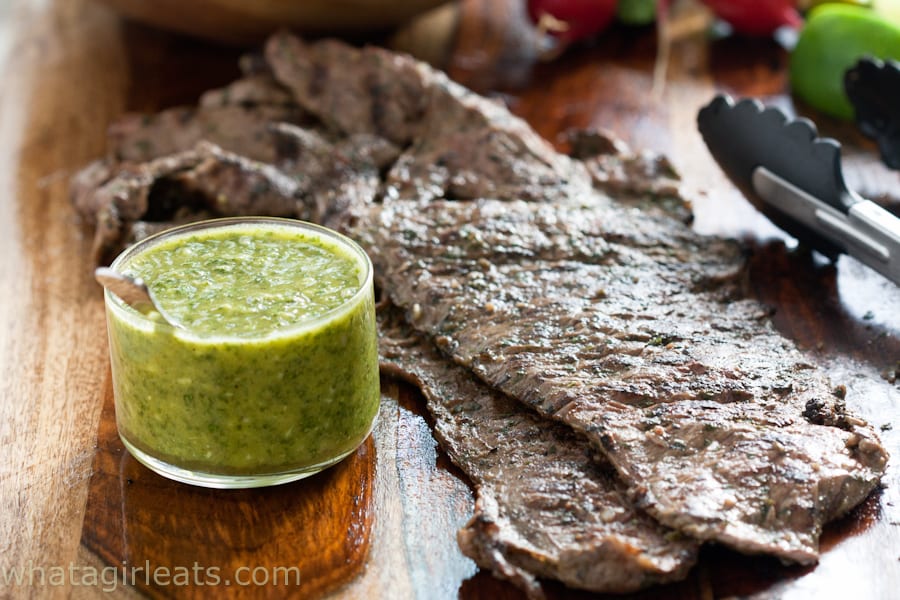 The Cilantro-Garlic marinade doubles as a dipping sauce or dressing.

This Cilantro-Garlic Marinade would make a nice addition to your grilling repertoire! 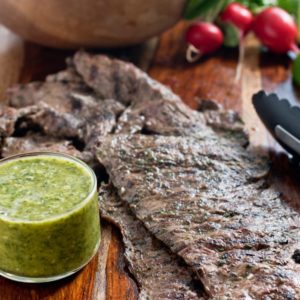 Cynthia
A delicious cilantro-garlic infused marinade that is also perfect as a condiment for steak. Please use fresh lime juice. If it's not available, omit it altogether. I used a half of a jalapeño and it was very mild. Use a whole chile or more if you like spicier food. Allow the meat to marinate for about 3 hours to over-night. Use this marinade on flank, skirt or flap-steak.
Print Recipe Pin Recipe Rate this Recipe
Prep Time 15 mins
Cook Time 10 mins
Total Time 25 mins
Course Marinade
Cuisine South American
Servings 4

Here’s a link to some of the items I used in this post.

To help keep my site running, What A Girl Eats is a participant in the Amazon Services LLC Associates Program, an affiliate advertising program designed to provide a means for sites to earn advertising fees by advertising and linking to Amazon.com, at no additional cost to you. Thank you for your support! 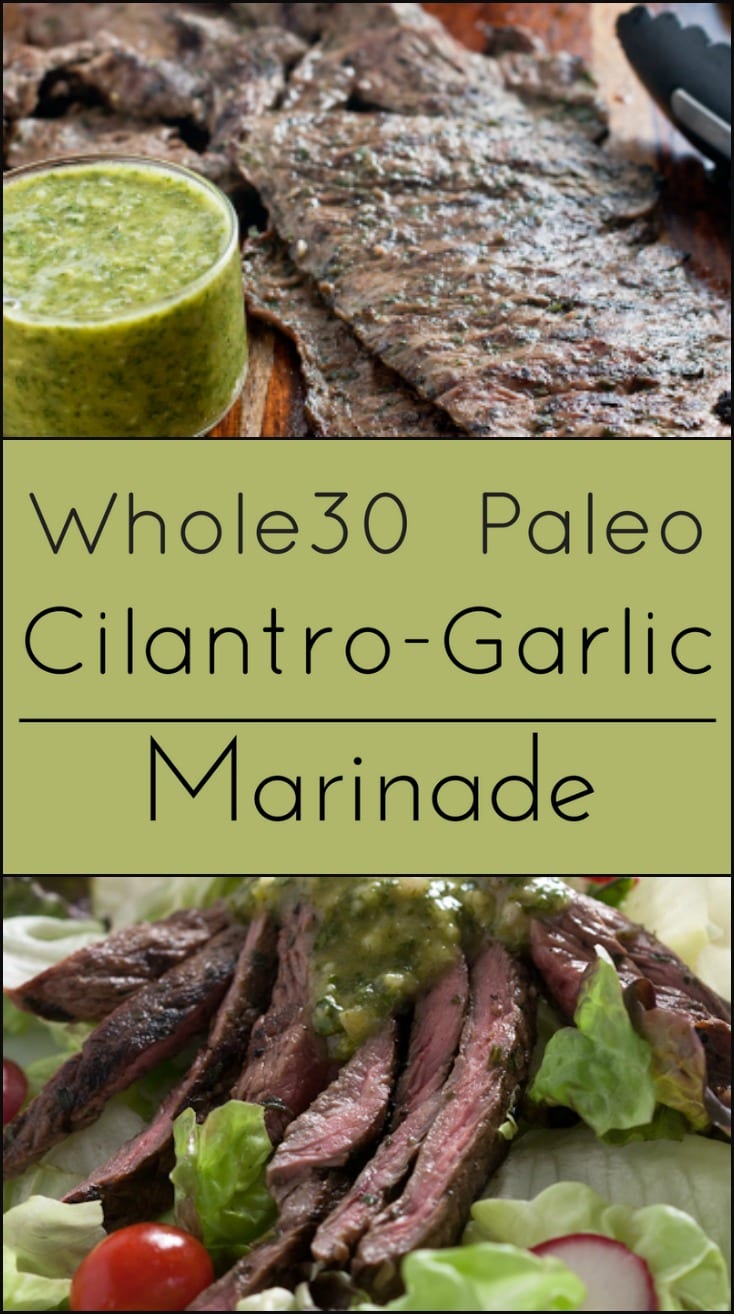