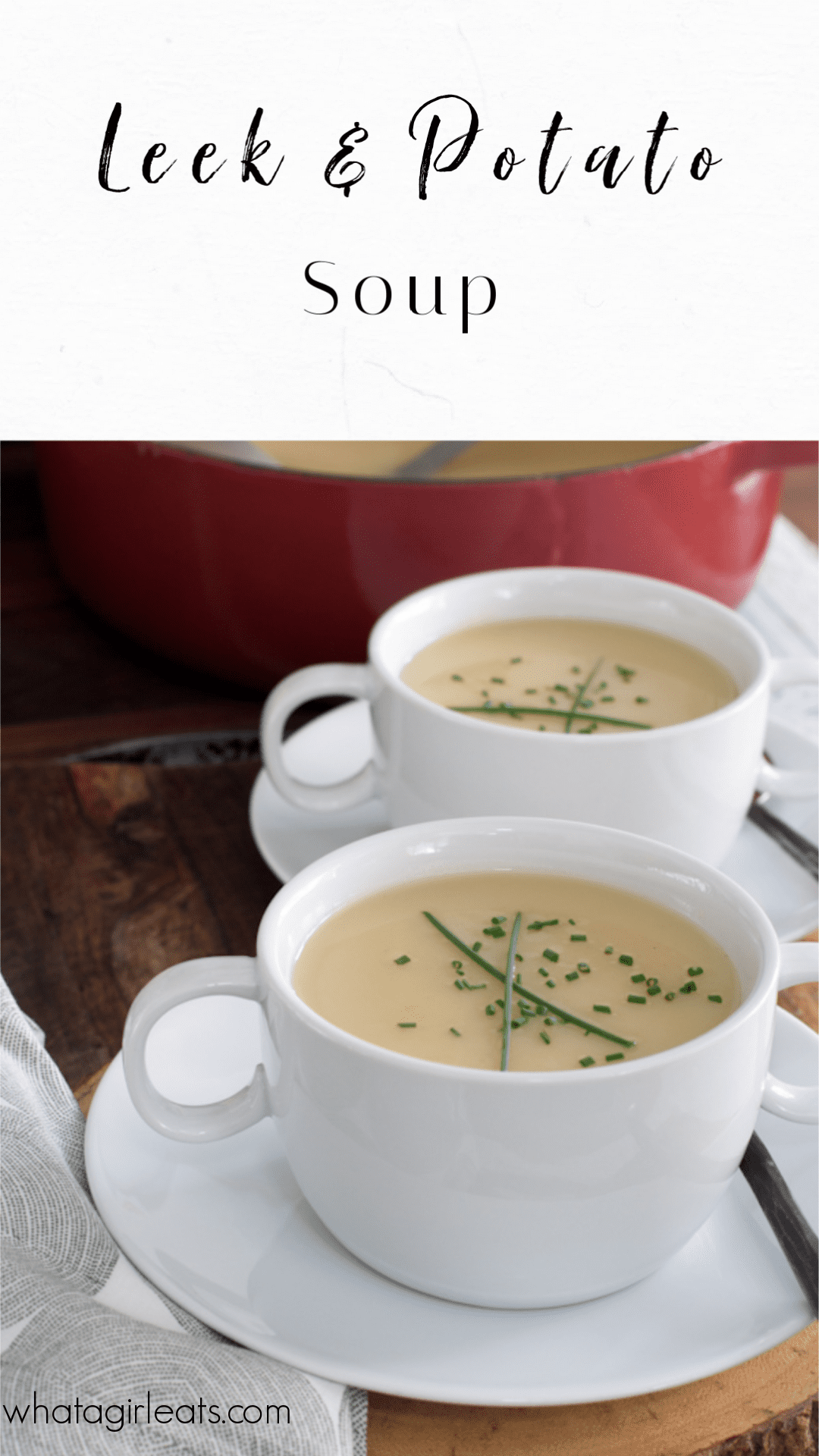 Leek and Potato Soup is one of the most versatile soups ever! Serve it hot with cheese or chilled and it turns into Vichyssoise! 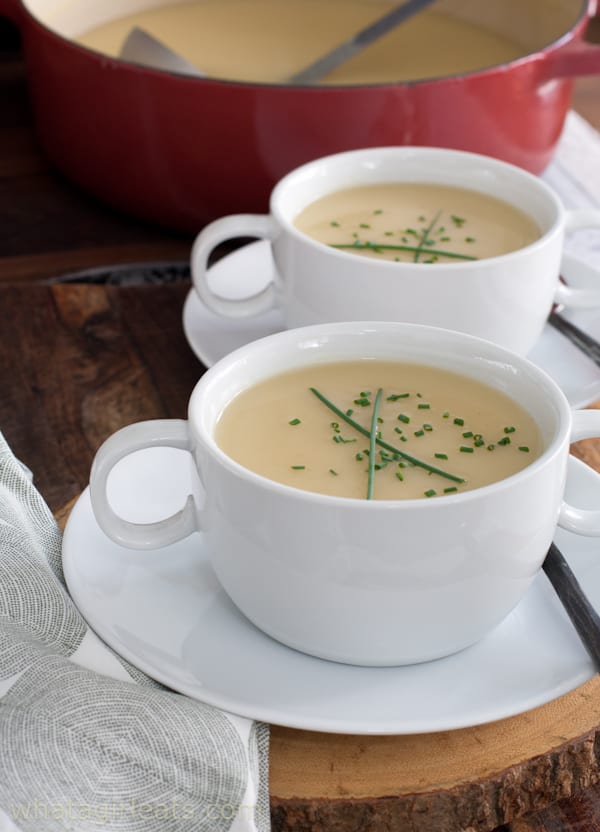 Leek and potato soup is a classic French soup. I love the versatility of it. It’s also the perfect base for other soups.

How to make Leek and Potato Soup

Besides being super easy, leek and potato soup require just a few basic ingredients. I always keep cartons of chicken and beef broth on hand for soups and stews. In addition to potatoes, you’ll need a leek or two. That’s pretty much it. It’s also very budget friendly and can feed a family of four for just a few dollars. (This post was originally posted on September 16th, 2011 and has been updated to contain nutritional information. As an Amazon Affiliate, I earn commission on qualifying purchases.) 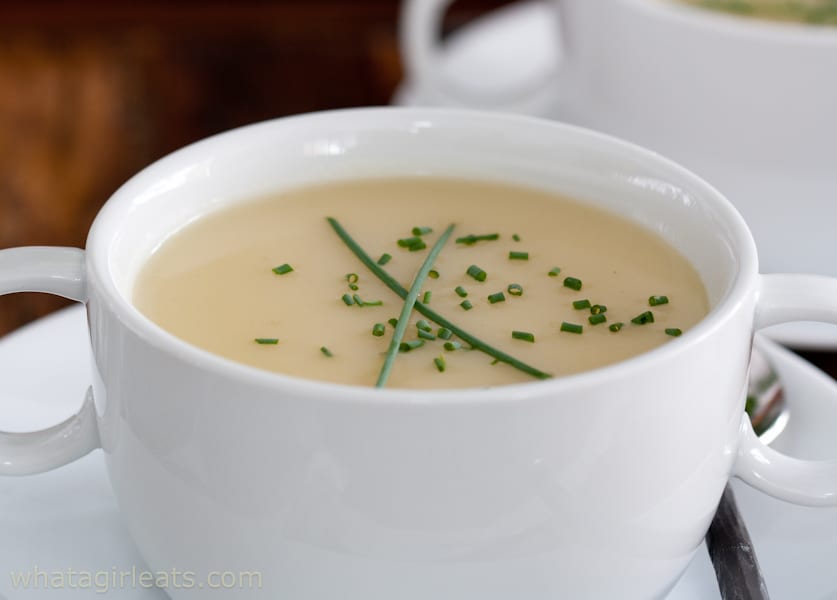 If you’ve never cooked with leeks before, try and find them in your super market next time you go.

After cleaning and slicing the leek, sauté over a medium low heat. Cover and “sweat” or cook the onions for a few minutes, or until translucent and soft. 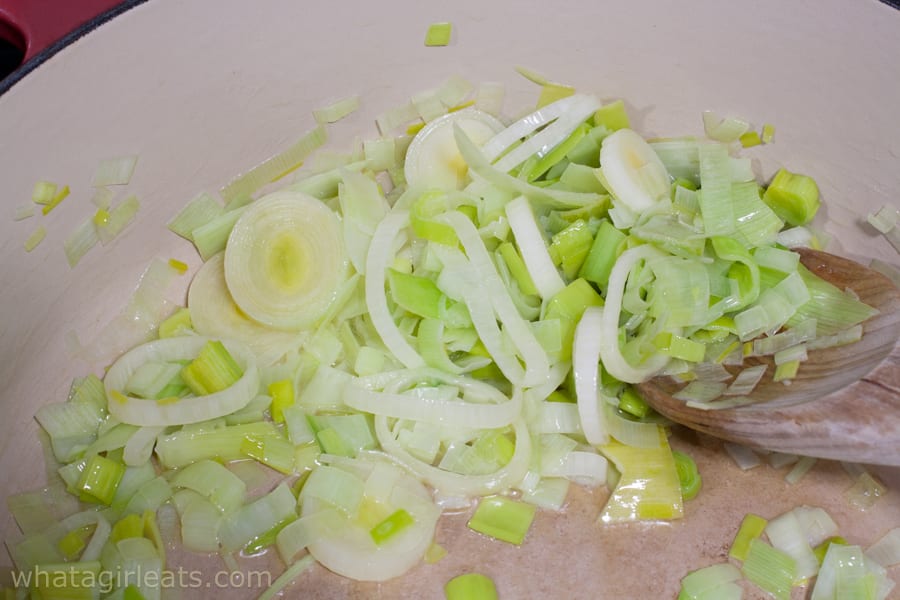 Add cubed potatoes and broth. Season with kosher salt and white pepper. Bring to a boil and reduce heat. Cover and simmer until potatoes are tender. 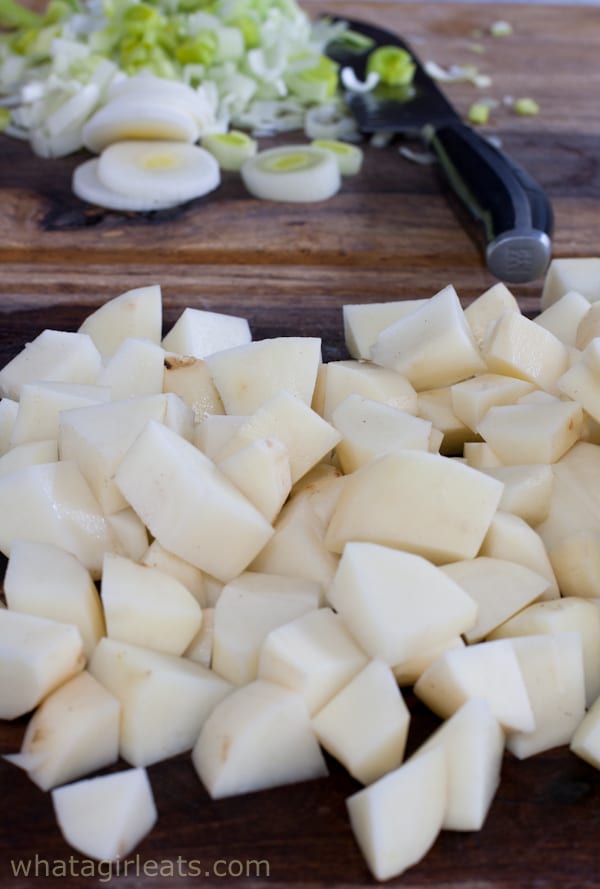 There are two ways to do this. The first is by using a blender. The second is using an immersion blender.

I prefer to blend my soups whenever possible. You’ll get a much smoother consistency than with a hand blender. This is the preferred method used in restaurants. If you use a blender, there are a few safety tips you should be aware of. First, make sure to fill the blender only 1/3 of the way. Especially if the soup is hot. Next, place a towel over the lid and hold the lid down with one hand, while blending. Many kitchen accidents happen because the heat of the soup, and the force of the blender can propel the lid, resulting in burns and a huge mess!

Using a stick or immersion blender

Season the soup to taste

Nearly all of my recipes contain the phrase, “season to taste”. This is a common culinary term. While it’s best to always season at the beginning, I tend to start with less salt and then check after blending for a final seasoning.

White pepper is always used in light colored sauces and soups like a bechamel or hollandaise where the specks of black pepper would be noticeable in the sauce or soup. White pepper has a distinctively different taste and is much finer than black pepper.

How to clean a leek 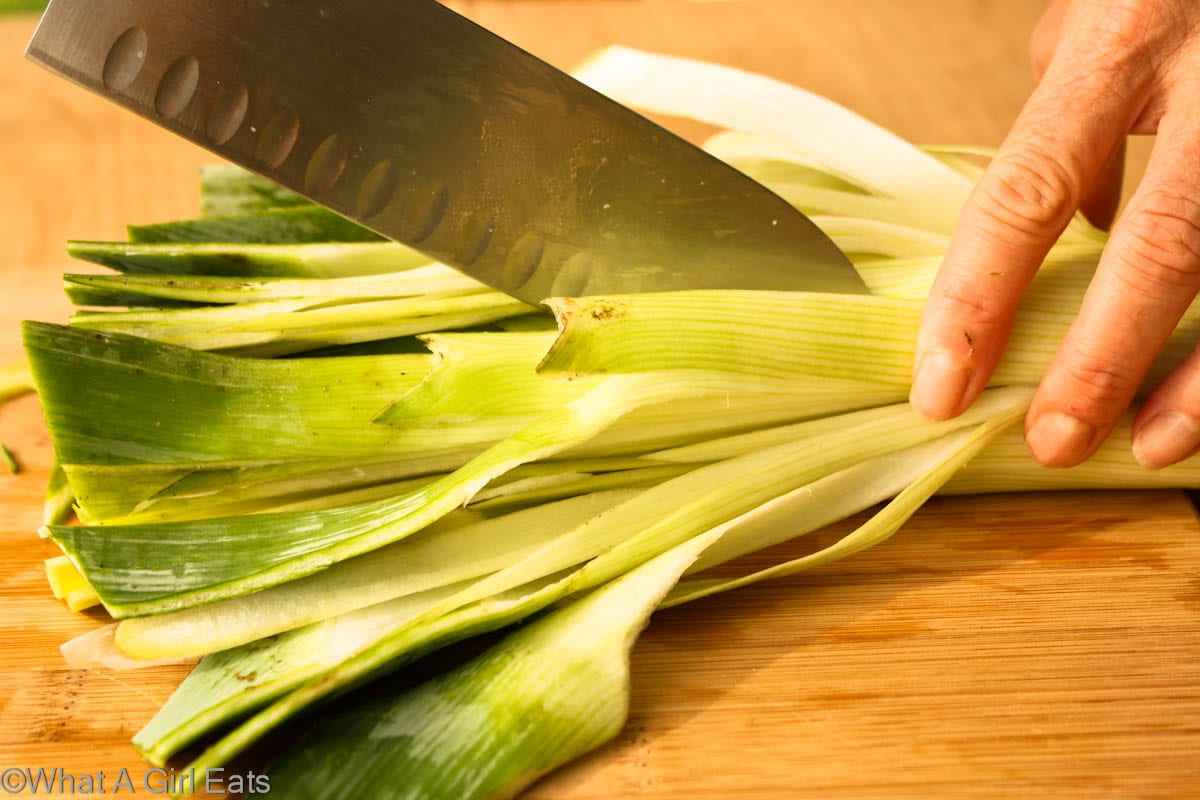 Leeks can be dirty! To clean a leek, slice vertically, and then really swish it around in water to get all the dirt out from in between the leaves. If you’re planning on using leek for something other than soup, slice into rings first and then swish in water to remove the dirt. 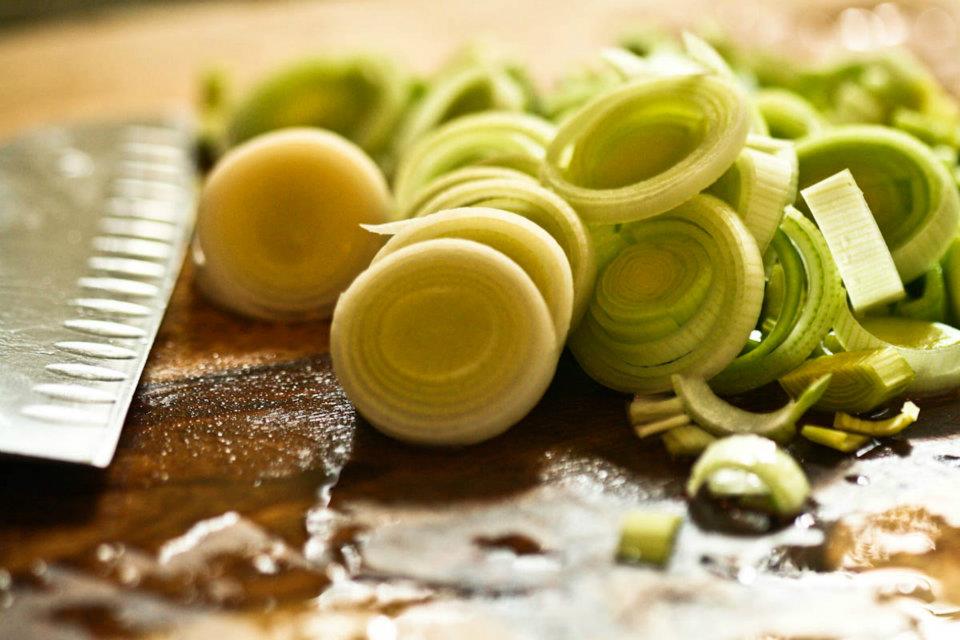 What’s the difference between a leek and an onion?

Leeks and an onion, while in the same family, really taste different. A leek is more subtle in flavor. Unlike a green onion, you won’t want to use all of the green part. But don’t throw the green leaf or “sheath” away. The green part of the leek is perfect for making a Bouquet Garni. After cleaning the leek, remove the uppermost green section, and keep the lightest green to white portion. 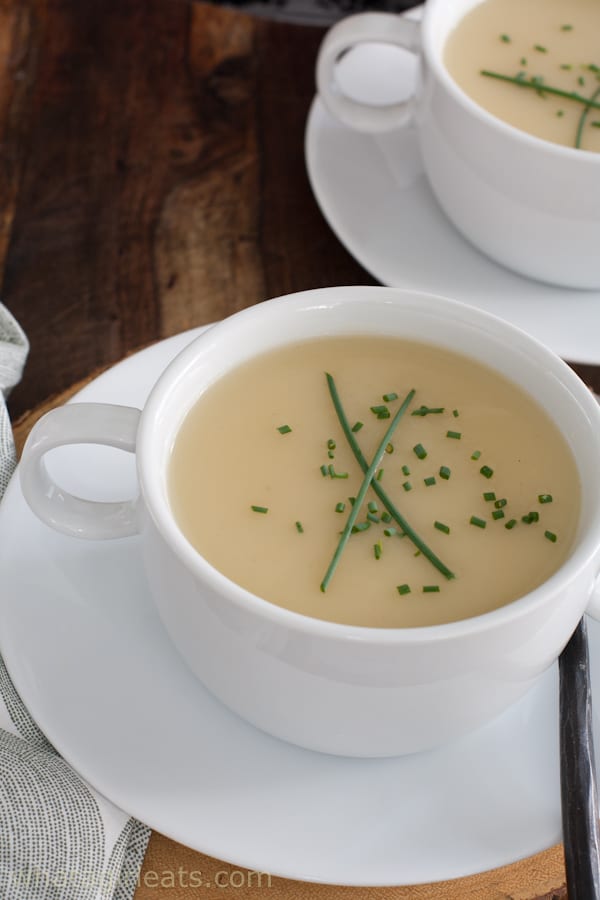 Can onion be substituted for leeks?

Yes! While the flavor of a leek is similar to onion, it’s more mild, so use fewer onions if you haven’t any leeks.

How can I make leek and potato soup vegan or vegetarian?

Instead of using chicken broth, substitute vegetable stock. In place of the butter, use olive oil. 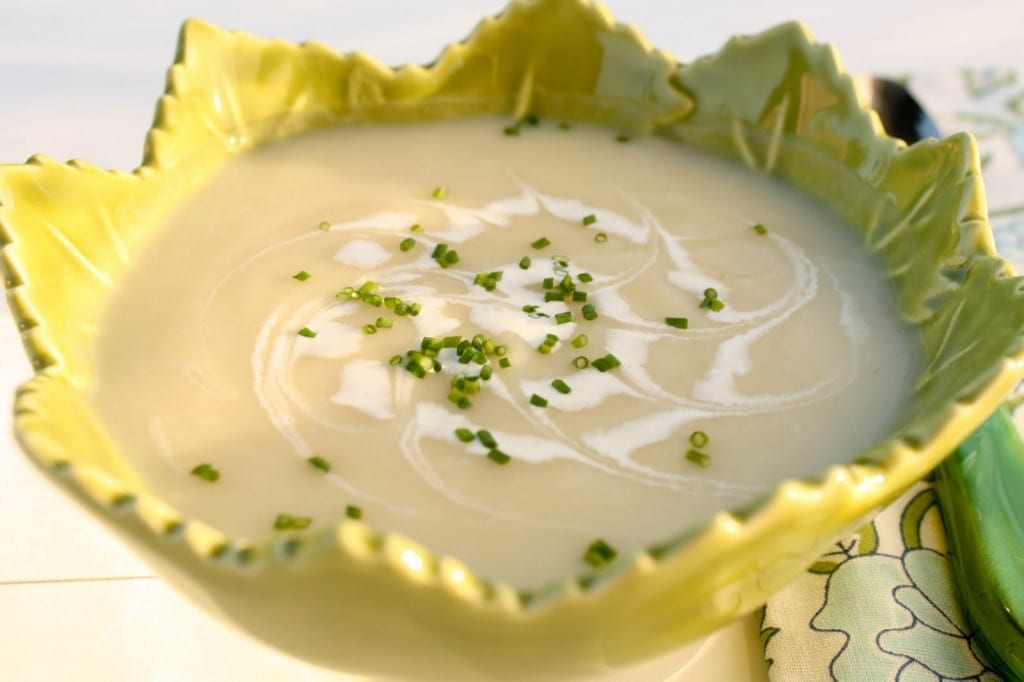 Vichyssoise is chilled leek and potato soup with a generous addition of cream. To make vichyssoise, use less chicken or vegetable stock. After blending and chilling the soup, add heavy cream until it’s the correct consistency.

Using Leek and Potato Soup as a Base for Other Soups 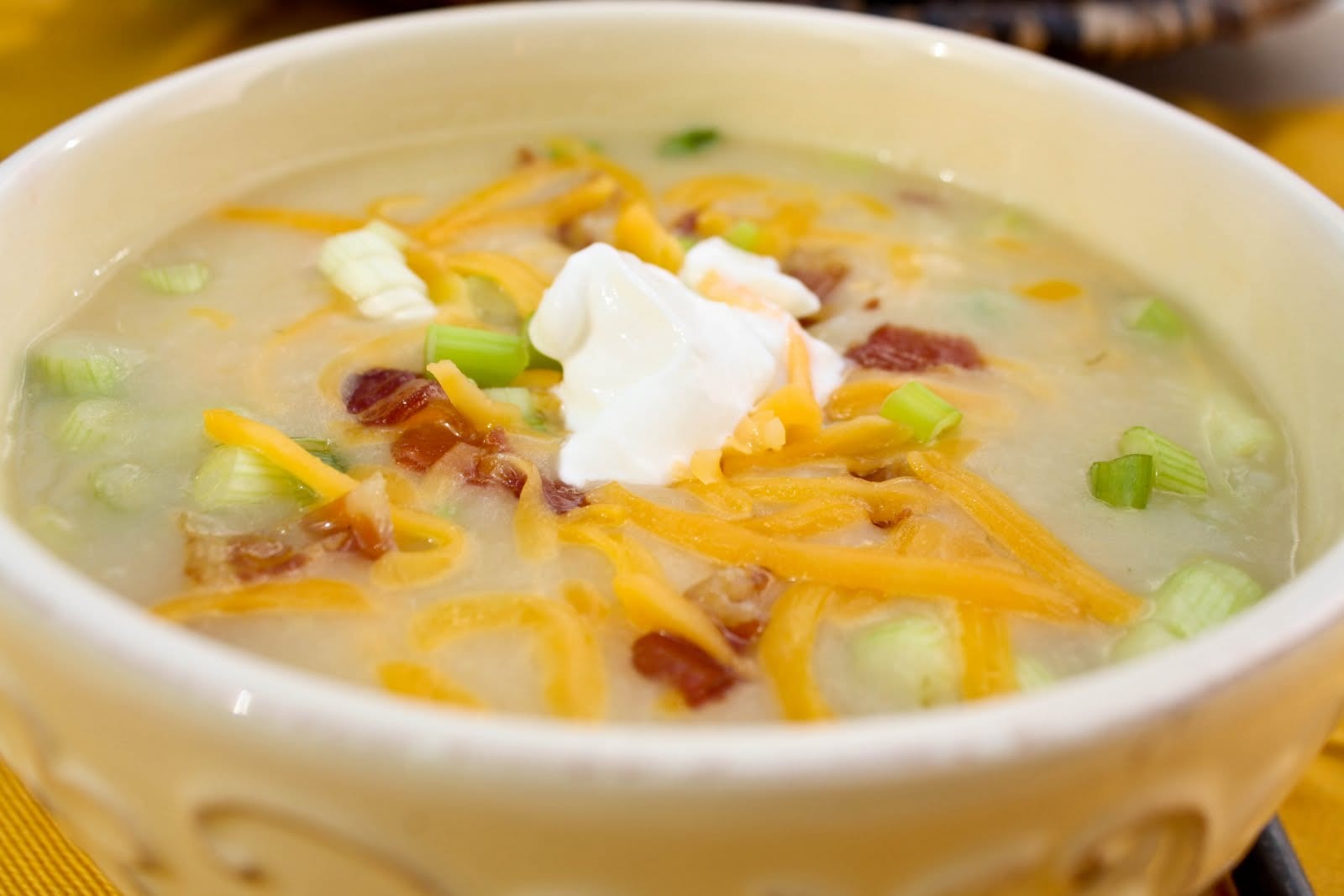 Instead of blending the leek and potato soup, use an immersion blender and puree it, leaving large chunks of potatoes. Add sour cream, shredded cheese, diced bacon and chives.

You can also use this recipe as a starting point and add diced broccoli, carrots, kale, spinach or corn. Cook until vegetables are tender and puree. 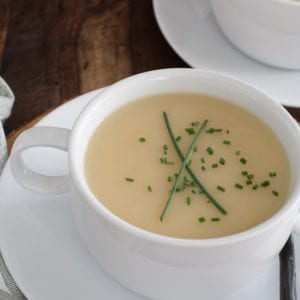