This recipe for a Quick Greek Gyros Salad came to me as a fluke, I really wanted Greek gyros, but our favorite Greek restaurant is in downtown LA. I did, however have a jar of their famous Greek seasoning… 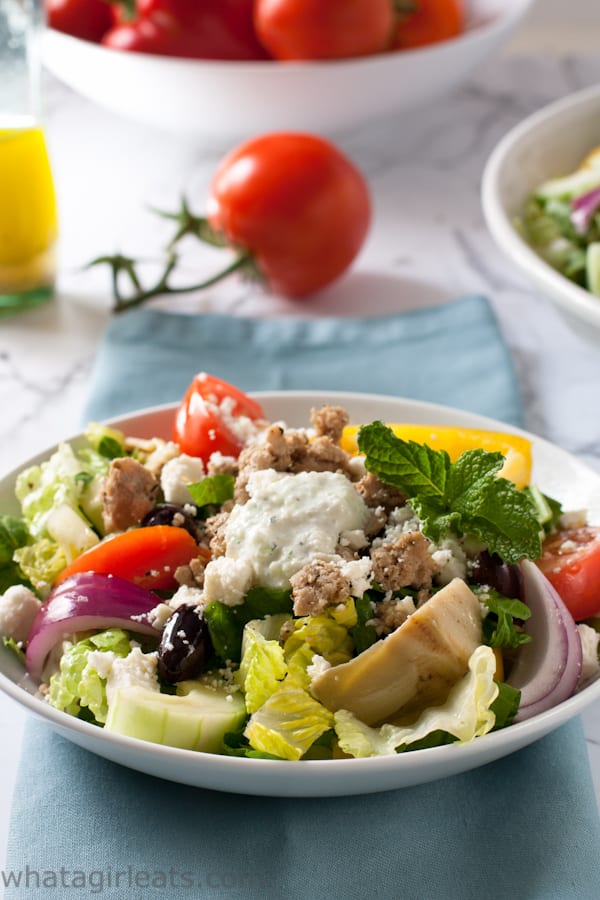 All the flavor of gyros, without all the fuss.

I made it the first time using Papa Christos’ Greek seasoning. After my daughter said she would eat it “every day…no really, every day!”, I knew I had to put the recipe here. Since the majority of you can’t get your hands on their seasoning, I had to re-create it using regular pantry spices. (This post contains affiliate links)

Since the main herb used in Greek cooking is oregano, and that was the main ingredient on the Greek seasoning jar, I decided to go heavy on the oregano. I wanted to keep it simple, so I just added garlic, some smoked paprika and salt and pepper in addition to the herbs. Traditional Greek gyros usually are more labor intensive and involve a couple of types of meat, stacked and pressed. The name “gyros” comes from the greek word for “circle” or “turn”. That makes sense when you think of the word “gyrate”. The meat cooks by turning on a vertical spit and then is carved off as it’s ordered. 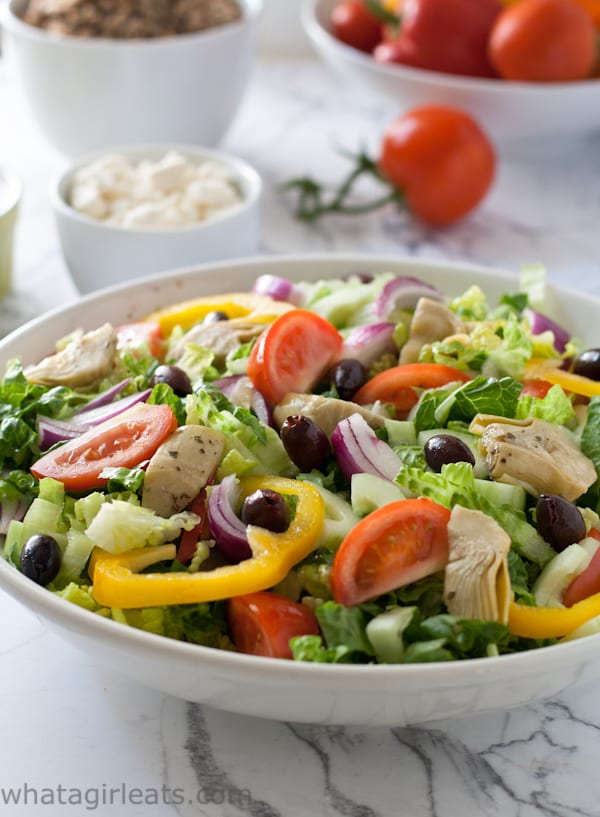 Serve as pictured for a vegan version. Add cheese and tzatziki for vegetarians.

While you could totally put the meat into a pita and serve it like a Greek gyros sandwich, I decided to make Greek style salad to keep it healthier.

This Greek salad is versatile for a variety of diets; Keto, Whole30, or Paleo.

Serving the salad and the extras separately makes it a great meal to serve when you’ve got different diets to contend with. Prepare the salad and serve the cooked meat, feta and tzatziki in separate bowls. Got a vegan? They can eat just the salad. Vegetarians can add Tzatziki and feta. Following Whole30 or Paelo? Just add meat and skip the dairy. 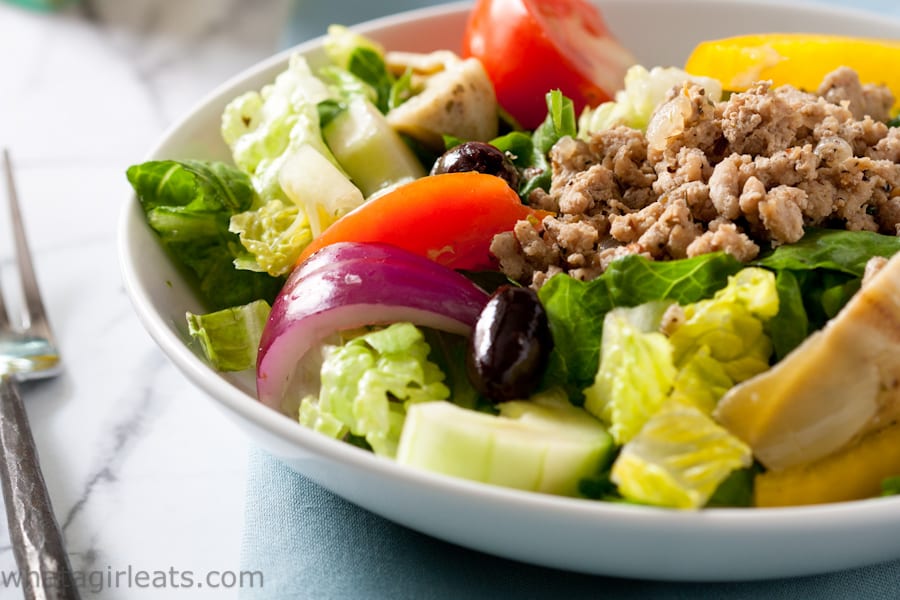 If you’re following a keto diet, load up your salad with the works. 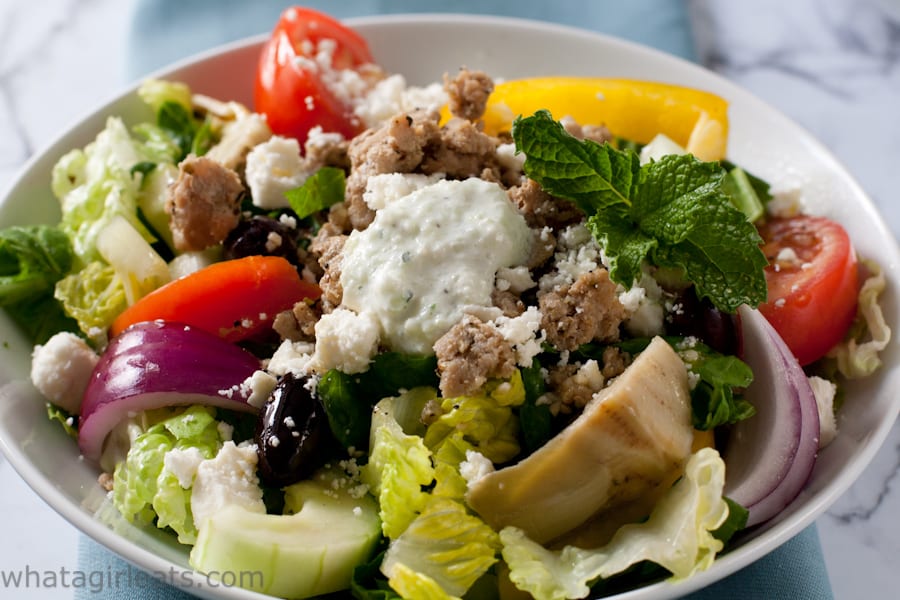 Keto version has a little bit of everything.

While a traditional Greek Salad is just feta, cucumbers, Kalamata olives, peppers and onions, I’ve added artichoke hearts…just because I love them.

How to assemble this Greek Gyros Salad

For this salad you’ll need a to make a Greek salad, mixed with one or two heads of romaine lettuce depending on how many you’re serving. You’ll also need Tzatziki, either store-bought or homemade. Here’s the recipe for the basic Greek Salad  andTzatziki.

(Some of the items used in this post are available for your convenience at my Amazon. I may receive a small commission on purchases which keep my website running. Thank you!) 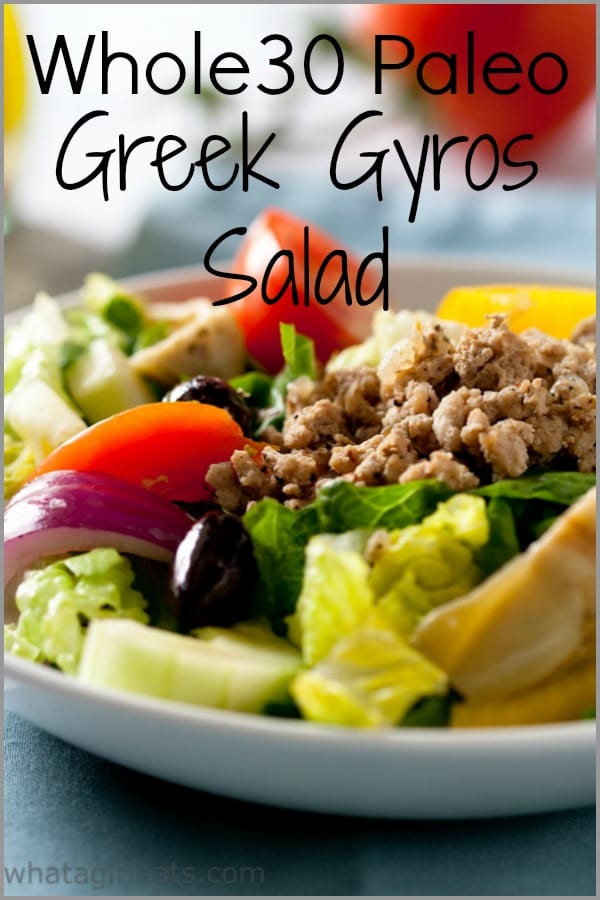 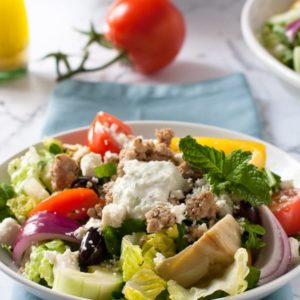 For salad dressing, whisk juice of one lemon, 1/2 to 3/4 cup of olive oil, 2 cloves crushed garlic and salt and pepper in a small bowl or jar. Check seasoning. 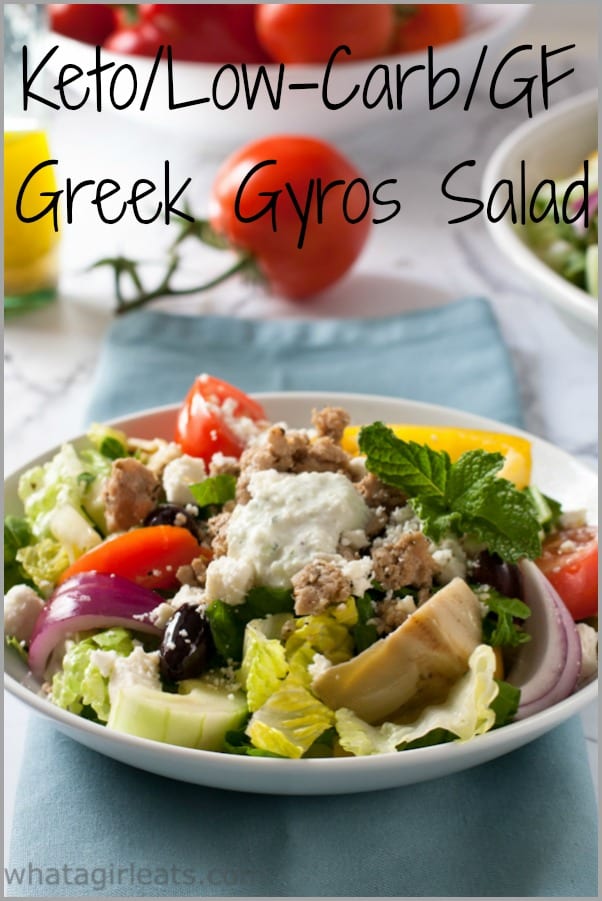