Tuscan White Bean Soup with Rosemary and Bacon is a flavorful, comforting soup, made easily in about 30 minutes! 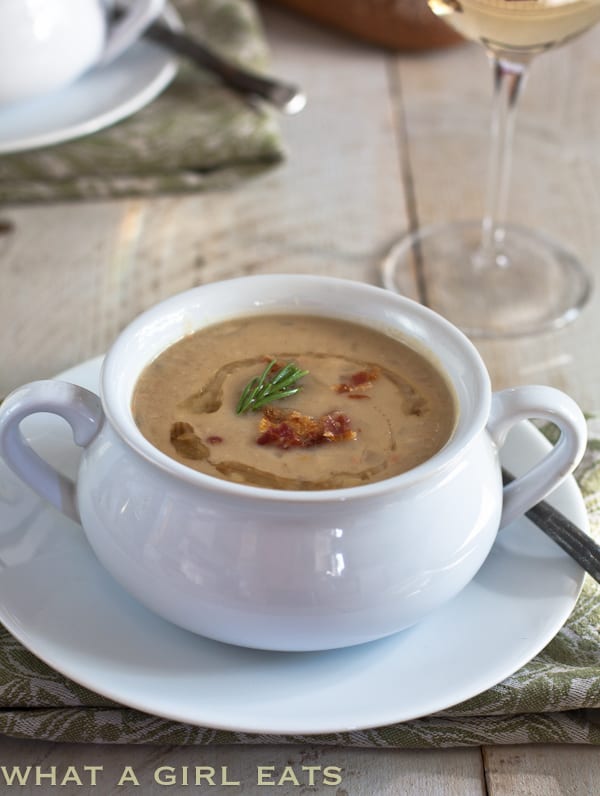 I have always had dreams of spending a summer in a villa somewhere in Tuscany. Long ago, I read Frances Mayes’ book, Under the Tuscan Sun, and have fantasized ever since, of that quiet, simple life.

If you’ve never read the book, please don’t confuse it with the “chick-flick” of the same name. That sappy film is similar to the book, only in that it’s also set in Italy. Frances and her husband purchased a run-down villa and spent vacations repairing the house and eating simply. Frances foraged in the over-grown garden for herbs and salad greens and walked into the village for locally made cheeses and sausages for their meals. Often neighbors would stop by with bottles of wine, vinegar and perhaps some fresh pasta and a dinner party would appear!

I like impromptu entertaining…an afternoon visit that stretches into an early evening dinner. I always have enough in my pantry to throw together a simple meal at the last minute.

Tuscan White Bean Soup is one those dishes that can be thrown together quickly using canned beans.

You of course, can always opt for dried beans. I also always have plenty of chicken broth, either homemade or canned available. If you are a vegetarian, of course substitute vegetable broth. I used The Barefoot Contessa’s, Rosemary White Bean Soup as a starting point, but instead of using dried, substituted canned beans, so that the dish would come together in under a half hour. I also decided to add applewood smoked bacon for a  little more flavor. This, of course, can be omitted if you prefer.

Serve the Tuscan white bean soup with a simple salad and bread. 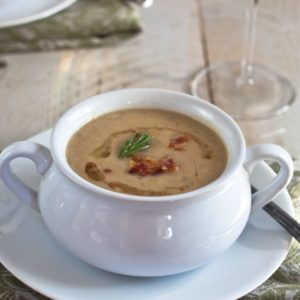