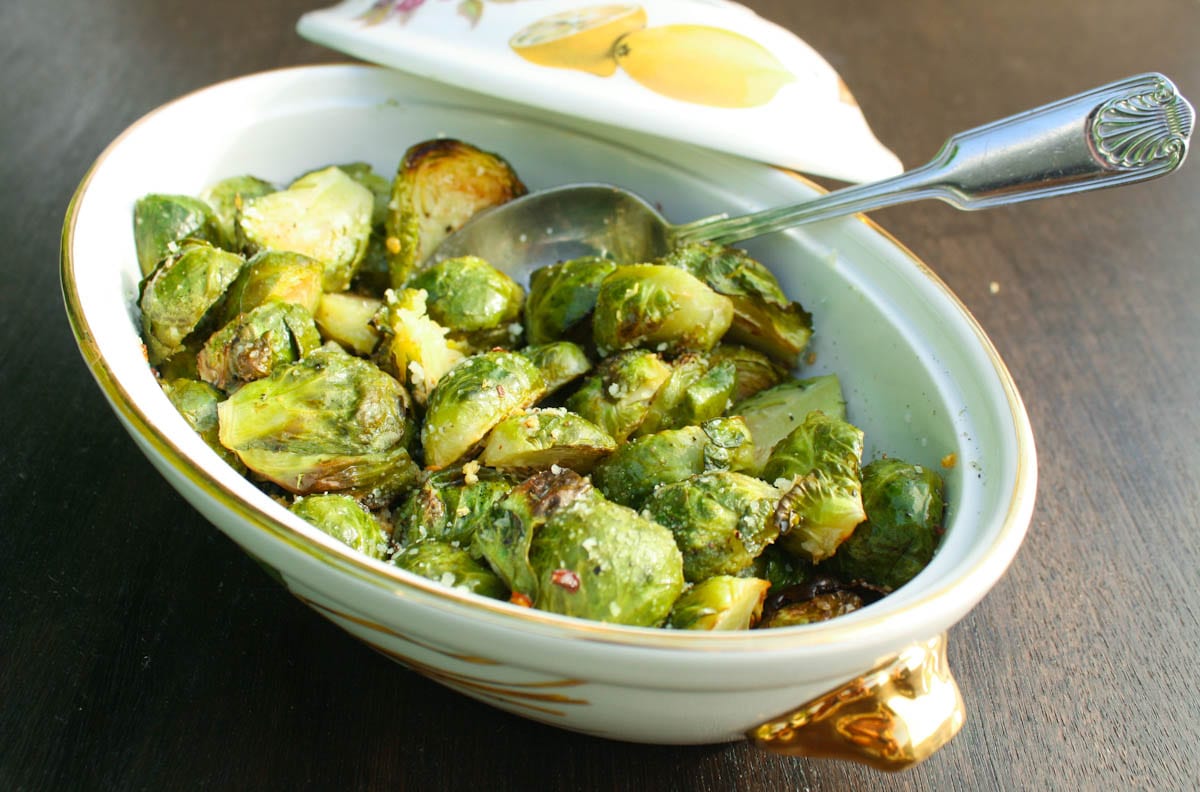 Roasted Brussels sprouts are loaded with flavor, especially when they are paired with crisp, salty bacon and crunchy pecans!

Forget Global Warming or the War on Terrorism. If you want a real controversy, malign Brussels sprouts. I found this out last November after making a simple observation about Brussels sprouts on Facebook. The comments, seventeen of them, were either in support of Brussels sprouts or in agreement with me on their um, taste. I’ve eaten this vegetable exactly once in the last 40 years, and that was under duress. As a kid, I am sure I either choked them down, or hid them in my napkin. Not wanting to appear culinarily un-adventurous, and since Thanksgiving seems to be one of the Brussels sprout’s best friends, I decided to give them a second chance. I have to admit, I was a bit drawn in by their packaging. They are now sold on the stalk, no doubt due to some clever marketer’s idea that it will make them appear more intriguing. 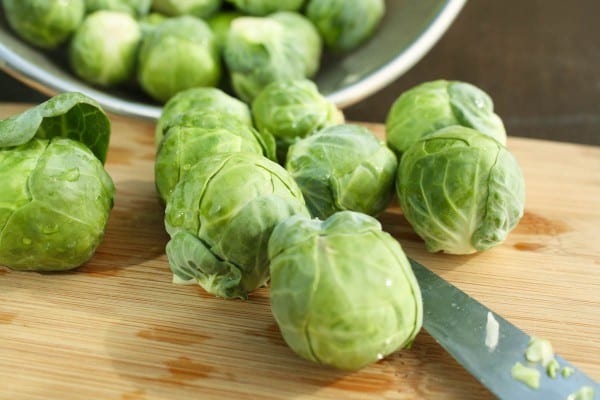 When I told Spencer I was going to be roasting Brussels sprouts, and knowing my keen loathing for this vegetable, he said, “Brussels sprouts are not sexy”. This is true. The Brussels sprout definitely lacks the slender appeal of asparagus, the seductive mystery of an artichoke or the All-American wholesomeness of the tomato. And yet, as with many things in life, preparation and presentation can easily sway our perceptions.
It also helped that Cook’s Illustrated had a full page on Roasted Brussels Sprouts in the most recent issue, from which I could choose a favorite preparation. I knew I wasn’t crazy, when Cook’s Illustrated said that they are, indeed bitter, due to enzymes and compounds, blah, blah, blah. 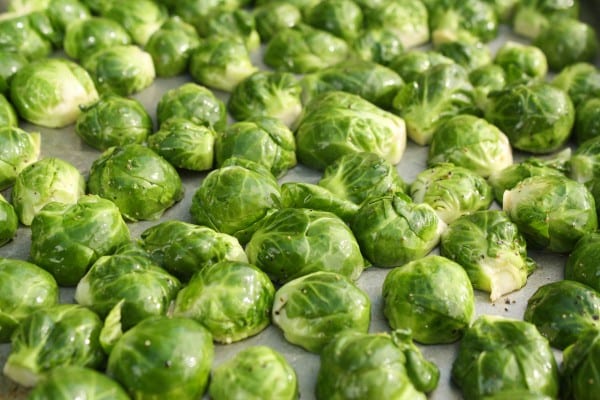 Coated in olive oil and ready to roast.

Most of my Facebook friends suggested making roasted Brussels sprouts, by drizzling them with olive oil, salt and perhaps some grated Parmesan cheese.

Could one of these preparations bring back the Brussels sprout from the vegetable netherworld? I could only hope.

The Cook’s Illustrated version with bacon and pecans at least had 2 out of three things going for it. My second choice was garlic, red pepper flakes and Parmesan. The recipe calls for 2 1/4 pounds of Brussels sprouts which coincidentally, was exactly what was on my large stalk after I removed them and weighed them.

I decided to make half of each recipe, because there was no way I was going to take a chance on close to FIVE POUNDS of Brussels sprouts in my house! The preparation was easy enough and definitely quick since I was halving them and didn’t have to make a small X in the bottom of each sprout. Roasting took about 20 minutes and the finishing just a few minutes.

This explains how to make basic, roasted Brussels sprouts: 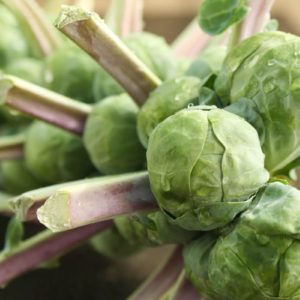 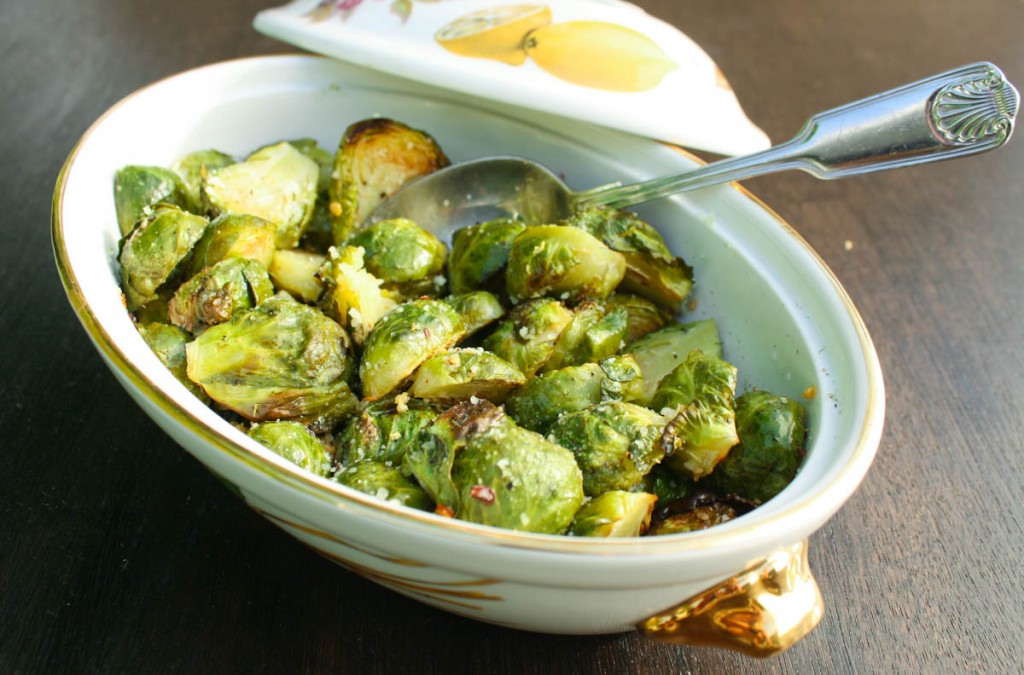 While my vegetable heart will always belong to asparagus, I’ve at least opened my palate, if not my mouth, to the possibilities of Brussels sprouts. The garlic, red pepper and Parmesan version edged out the bacon and pecan version by a nose in our family. I actually ate a whole serving! Sophie and Spencer even said “mmm”, even though they spent the whole day shaking their heads and muttering, “Brussels sprouts?”, as they watched me prepping, cooking and photographing them. 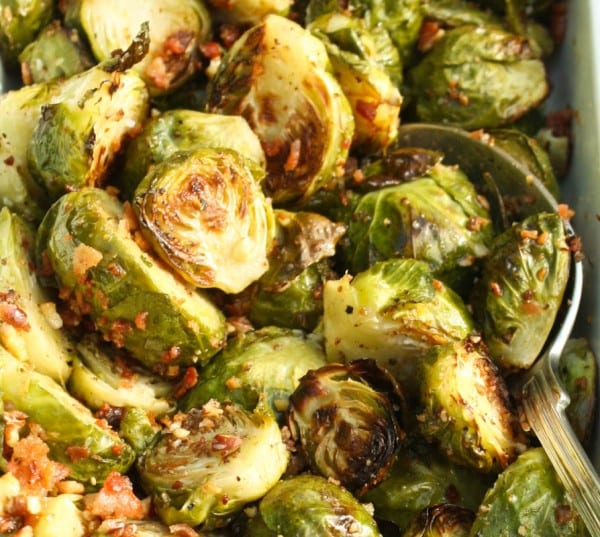 Brussels sprouts with bacon and pecans. A side for a Southern Thanksgiving

Here’s the recipe for Roasted Brussels sprouts with Bacon and Pecans. 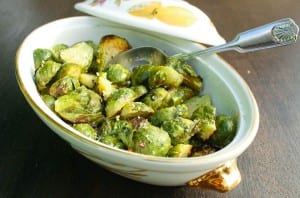