This is a tale of a white truffle… 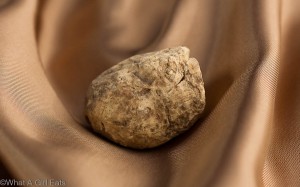 Like an eager J.C. Penny Portrait Studio Photographer, I had to shoot him on satin…

My friend Jack called me a few days after Christmas. “I need your help“, he half whispered, like a man who needed someone to help him make bail. “I got a truffle as a Christmas present and I don’t know what to do with it.” Jack is in the entertainment field and lives on the West Side of L.A., where all those entertainment types live.  He had gone to a Hanukkah Party at the house of a Big Hollywood Television Studio Head. 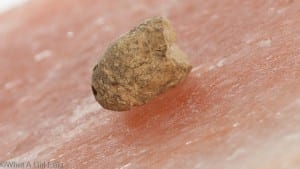 …on a Himalayan Salt Slab…

She had given him a White Italian Truffle as a gift. “It came in a small container, on a bed of rice…and I have to change its diaper every day!” I’m guessing that Big Hollywood Television Studio Heads, who don’t spend much time with we plebes, go for White Italian Truffles when the Harry and David, “Holiday Tower”, just won’t do. 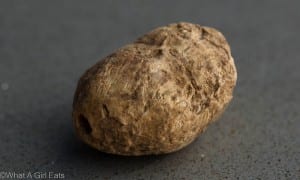 Jack knows I like to cook, but I haven’t looked a truffle in the eye since cooking school. I remember the chefs bringing black truffles out of locked boxes to add to dishes. We smelled. We tasted. It was part of the experience. But that was 30 years ago. The closest I get to fungi these days are mushrooms.

Jack and I set up a date for us to “explore” the  truffle, just after the New Year. That gave me a week to research possible dishes for his baby. Making truffle oil, seemed like a good idea, except for the possibility of botchulism, which of course, is never a good idea. 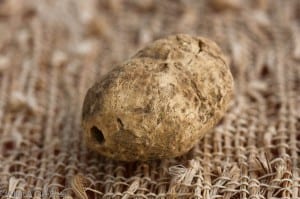 …and finally on the manly burlap.

He came to my house bearing gifts from his recent trip to Turkey, a gram of saffron and a beautiful robin’s egg blue Pashmina shawl. I’d set up a place to take “his” photo. I will tell you with complete confidence, that I believe truffles are males. Female boars, (sows) are used to hunt truffles, since the odor they give off is similar to a male boar’s pheromones. 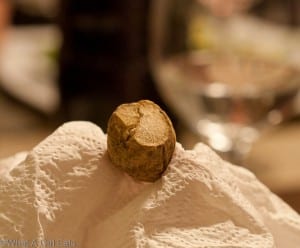 Jack carefully lifted the truffle from a bag. When he lifted the lid, we took a deep breath and soaked up his “truffle-ness“. “How much do you think he cost?” Jack asked. I had a pretty good guess, Italian white truffles cost about $3,500 a pound…yeah, that’s right…THREE THOUSAND FIVE HUNDRED DOLLARS. Which of course would blow my grocery budget until uh…August! I pulled out my food scale. This bouncing baby truffle weighed in at just over a half an ounce, so I figured he was worth some where between $125 and $150. And we were going to shave him and eat him for lunch.

“Jack“, I said. “I’ve thought about it. I think the best thing for you to do is share him with a few friends…have a truffle party eat him all in one fell swoop.” We are both at the age where we really should be enjoying everything and not waiting for the “perfect” time.

We decided we’d experiment with tiny servings of pasta with clarified butter, shaved parmesan and little shavings of truffle. He’d save most of it for his “Truffle Party”.

Jack left with plenty of ideas. The next day he emailed me and asked me to be one of his truffle party guests. I would bring Chocolate Truffles for dessert. 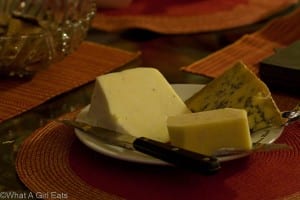 The appetizers were Marcona almonds with Rosemary, cheeses and quince paste. 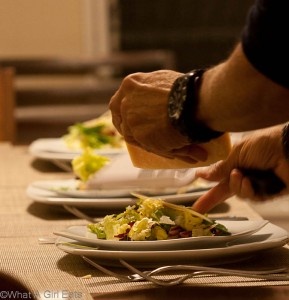 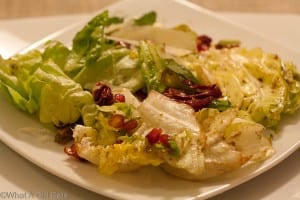 The next course was Proscuitto and melon, followed by Fettuccine tossed with clarified butter, olive oil, shavings of the truffle and fresh parmesan. 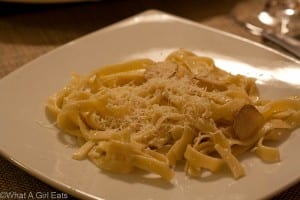 Dessert were Lori’s homemade lemon bars and cookies and my Chocolate Truffles and port and Stilton. 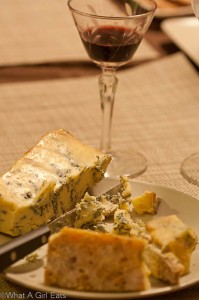 We didn’t use quite all of the white truffle, and as I was leaving, Jack presented me the rest of the truffle, with a clean diaper resting on a bed of arborio. “I can’t think of anyone who would appreciate him as much as you would…take him” and he shoved him into my bag. Sniff. I knew exactly how I’d finish him off…

After this silly post, I know what you’re thinking…”Is she crazy? I will never, ever make Risotto with Asparagus, White Truffle and Fresh Parmesan!” And to be perfectly frank…neither will I again. Unless I become friends with a Big Hollywood Television Studio Head, and she or he decides that instead of the Harry and David “Holiday Tower”, they’d like to give me an Italian White Truffle.